Exactly a week ago, our Prime Minister Narendra Modi was in Bangalore to inaugurate the 21st INCOFYRA (International Conference For Yoga Research and Application) hosted by S-VYASA. Thanks to my association with DISHA, I was fortunate enough to receive a pass to attend the inaugural session, entry to which was by invitation only. This blog post is about my experience of participating in this event and my subsequent take home learning. 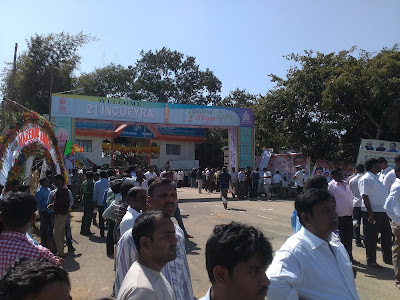 The inauguration was to begin at 3.30 pm and we had been warned to take our seats well in advance, within 1.30 pm. I left home at 10.45 am and traveled with three other DISHA members, reaching the venue within the specified time.

When I had heard that entry to the event was by invitation only, I’d imagined a compact group of a few hundred people in a sedate hall. I had even joked with my family and friends about getting a selfie with the PM. Nothing had prepared me for the festive atmosphere that marks a local fair or a public rally. As we waited near the entrance of S-VYASA to catch up with others from Team DISHA and receive our passes, it seemed like a never-ending stream of humanity was winding its way to the venue. 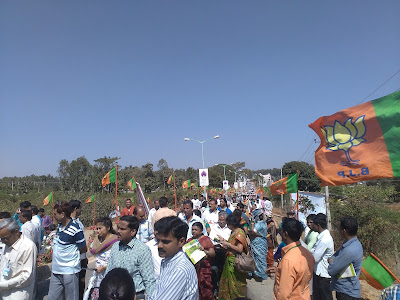 Passing through multiple security checks of our IDs, passes and belongings, we reached the actual place where the inaugural session was to happen and scrambled to find seats. Forget a selfie, I couldn’t even see the stage from where I was seated and had to rely on the display screen to see what was happening.

I was told there were about 8,000 people present against the expected 5,000. Earlier, waiting outside the gate, I had noticed that most of the attendees did not look like the typical conference crowd. The massive crowd and the subsequent events confirmed my hunch….most of the people – much like me – were there not for the conference, but for PM Modi.

And this, I guess, sums up the magic of the man.

Every time a helicopter was heard whirring overhead, the crowd rose in excitement, chanting “Modi, Modi.” The excitement was palpable and no one was immune from it. In fact, one of the police officials who made quite a few attempts to tell us to sit down gave up after a while in exasperation. The bhajans, the Veda mantras, the conference theme song and its explanation, the commentary from the anchor – all was lost on the crowd that was only waiting to see and hear the PM. 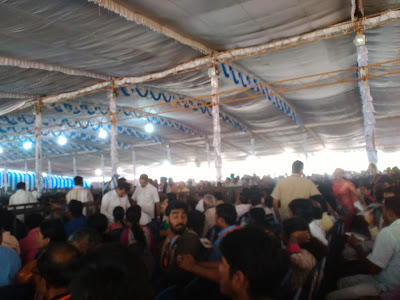 Finally, he arrived to tumultuous cheers that took a while to subside. Other dignitaries spoke but we barely registered what they said because everyone was waiting to hear Modiji speak. Even during the address by the CM of Karnataka, chants of “Modi, Modi” rent the air.

Finally, after releasing a souvenir to mark the conference, the PM stepped up to speak and we were all ears. He began in English, spoke about the importance of yoga and how countries all over the world had adopted it.

Midway, he cut to Hindi, speaking of his previous visits to SYASA, and reminisced about one of the founders Lakshmi Amma and the love she showered on everyone. The claps were the loudest when he expressed the hope that the hospital at SVYASA would not only heal the ailments of the ill but also be like a river of love in memory of Lakshmi Amma. 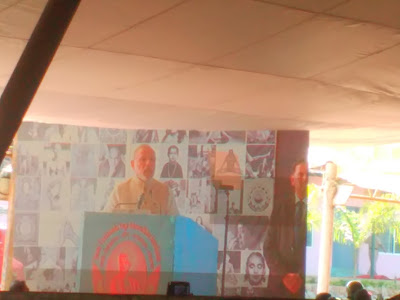 Overall, he emphasized that yoga was now not only India’s heritage but belonged to the whole world and pointed out that we need  knowledgeable and trained yoga experts.

As the PM was completing his speech, people started moving out, again driving home the fact that they had come to see and hear him alone. Not many had the patience to listen to the vote of thanks, either.

We waited for a while to let the surging crowds move and then began our return journey. In the time it took me to reach home, PM Modi had flown back to Delhi and wrapped up a meeting with NSA Ajit Doval to discuss the Pathankot siege.

When he was speaking at SVYASA, I remember thinking that there was nothing extraordinary about the speech nor was it particularly moving. In fact, I felt he appeared a little tired or preoccupied. I had a fleeting thought – what did he say in that 25-minute speech that most of us didn’t know already?

I also realized that I had probably known this before I asked for a pass to attend the event. Why, then, did I choose to attend, traveling about 70 kms, skipping lunch, and giving up the one day of rest I get after a hard week’s labour? Probably for the same reason as most of the crowd that day – to behold and hear in  real life a man of whom I’ve heard so much that he’s actually grown larger than life. A man who for some reason awakens a strange hope in many of us, that all is not lost.

Come to think of it, the undistinguished speech itself was something to learn from. That real life is often drudge and grind, far from the heroism of rhetoric. The latter holds strong appeal, but the former is what shapes our reality. How long are we going to look for inspiration in our PM’s speeches? A motivating talk may conjure up an image of a bright future, but what is its value if we are only fleetingly moved?


The future he envisions is a dream that most Indians bought into when they voted the BJP to power. Whether that stays a dream or becomes reality depends on how many of us get down to the unglamorous task of staying self-motivated and doing what we can in our individual capacity. A system, a society, is made up of individuals and each one of us is key to its functioning.

PM Modi may be someone to look up to for pointing out the path ahead but ultimately, whether our country gets there or not depends on how long and how far each one of us is prepared to walk.
Posted by Anu at 00:29 3 comments: