On 14th August 2017, at the stroke of midnight, while the world slept, I awoke … not to freedom, but to being captive to the sounds of construction activity in the plot behind my house. Preparations were on in full swing for the morrow’s important program – the inauguration of an eatery to be run in the name of the daughter of the man who gave us the famous ‘freedom at midnight’ speech.

This morning I got up at night, 4 o’clock in the morning (like the same guy’s great-grandson once hilariously said) to find that the din of the construction activity had miraculously stopped. Perhaps the contractor in-charge decided that the Indira Canteen was as ready as could be. Or maybe the downpour by the whimsical rain gods had forced them to take cover. 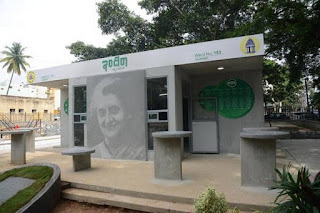 A few hours later, as I walked to college, a neighbor told me the inauguration was to happen tomorrow – on the 16th of August. Someone else says that there are rumors Rahul Gandhi will be coming to grace the occasion. Whether that really happens is yet to be seen but all the common man is bothered about right now is to see if the Canteen lives up to its promise of wholesome, tasty food with breakfast at Rs 5 and lunch at Rs 10. Freedom from hunger and freedom from high price of food is what matters the most. 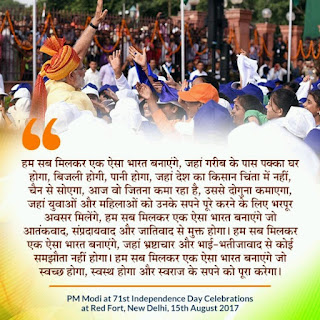 Listening to the Hon. Prime Minister’s address to the nation on TV, it sounded to me like this time, he stepped up the pace of his speech. Maybe when you have so much to convey, and so little time to do it in, and so much more yet to be accomplished, you tend to talk faster so that you manage to cover it all.

At college, as we stood silently at attention while the management office-bearers hoisted the flag, I couldn’t help but notice the sound of the ‘Suprabhatam’ (made immortal by M S Subbulakshmi) playing in the background. No, it wasn’t someone’s cell-phone ringtone. Rather, the sound emanated from the small Ganesha temple on-campus that is fitted with a sound system that plays the Suprabhatam on loop in the mornings. No one had noticed to switch it off or lower the volume today and so it was that the exuberant tones of the National Anthem mingled with the strains of the prayer to Lord Venkateshwara, proclaiming Him as the Saviour of us all. Given the state of our social media debates today regarding singing the National Anthem and the National Song, that sentiment is probably going to be strong in many of our minds.


A cloudy sky and inclement weather tends to make people want to get on faster with things. The school band stepped up its pace and march, the NCC parade put up far fewer formations on display and people quickly headed into the auditorium for the cultural program to follow. 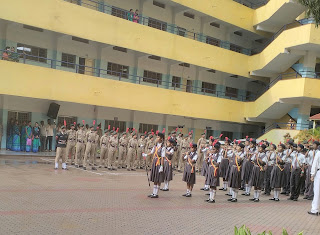 During the NCC parade, I observed a woman filming the entire event from the first floor. She didn’t appear to be one of the college staff. I caught myself wondering what she would do with it later…and in general, thinking about what people do with these videos they create. Do they put it up on social media? What will be the significance of it for people removed from the incident? Later, as I walked out of the college, I got something of an answer. I noticed this same woman and a much older woman posing with the leader of the NCC unit and judging from their interaction, they were likely to be his mother and grandmother respectively. So much for my mental acrobatics – it taught me there is often more to things than what meets our eyes.

A little while after reaching home, my son came home from his school flag-hoisting ceremony. His march past performance had gone on well, and he’d done justice to his speech about Independence Day – in Sanskrit. Some time later, I got a message from his Sanskrit teacher saying the speech was really good and everyone liked it. Quite a memorable way to celebrate your last Independence Day in school.

From being held in your mother’s arms as she attended flag-hoisting to being on your way out of school yourself, that's 15 Independence Days !

And even as I finished writing this blog, I chanced on this picture of Indians in flood-hit Assam celebrating Independence Day and it quite brought tears to my eyes. When a land is loved so much, there is nothing that can stop Her from progressing !! 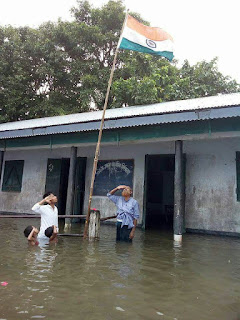 The prompt for this month's short story was "The Club" and we were given a word limit of 750 words. I toyed with different ideas for the story - I thought of things that the word "club" bring to mind - a hobby class, a group of friends with a common interest, an event set in a bar and even an out-of-work writer starting a club to write life stories for people who're down and out. Nothing seemed to click, although the last of those ideas is something I definitely want to consider more seriously some other time.

Finally, I tried some lateral thinking to come up with other contexts where the word "club" is used and almost at once, the Mace or Gada - the favoured weapon of Hanuman came to mind. Then followed a Wikipedia search to confirm that contextually, the mace is indeed a type of club so that my story would fit the writing prompt. Satisfied with what I found, I sat down to write and the result that flowed is this short story. Happy reading ! As usual, comments and feedback are most welcome 😄


Ravi ambled along the pathway that led up to the door of his new house. He still couldn’t bring himself to think of it as ‘home.’ Home meant a place where he had stayed with his parents. But Ma and Baba were no more – they had been killed in a horrible road accident. Chachu, Baba’s younger brother, had brought Ravi to this house to be cared for by Dadi.

Old she may be, his grandmother, but Dadi had a sharp eye. Which is why Ravi pulled down the sleeves of his shirt to cover the bruise that was building on his left upper arm. That big bully in class had cornered Ravi in the playground, grabbing him, trying to have some cheap fun at the new kid’s expense. Thank God the school was closed for the next week, so he wouldn’t have to face the brute very soon, thought Ravi.

“He must be at the akhada, where else?”

Ravi dropped his school bag in a corner of the room, changed out of his uniform and ran from the house, calling out to Dadi, “I’m going to see Chachu and I’ll come back with him.”

The akhada was the local gymnasium where the wrestlers trained. Chachu was one of the most respected wrestlers around town and was now training a new batch of students. Ravi entered the akhada and watched all the activities with wide-eyed wonder. 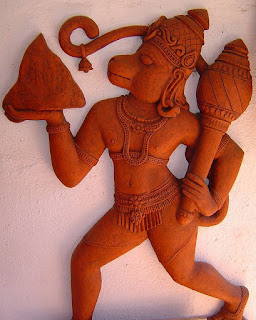 The young men first prostrated in front of an idol of Lord Hanuman, who wielded a club in his hand, called ‘Gada’ in Hindi. He was considered the champion god of all wrestlers, worshipped for His strength and wisdom. Later, the trainees went through their exercise and wrestling routine, sparring with each other under the watchful eyes of Chachu.

“Did you finish your homework, Ravi?” called out Chachu.

“No, I’ll do it later. Chachu, why do your students do some exercises with the Gada?”

“It helps to strengthen the muscles of the back and chest, Ravi, and also makes the arms more flexible.” Chachu winked and said, “Some of them also think Hanumanji’s strength flows into them when they practice with the Gada.”

“Will you please teach me to wrestle, Chachu?”

“Hey, you’re still too young, Ravi. Now is the time you must be studying, not wrestling.”

Chachu noticed the gesture and frowned, as he caught a glimpse of the bruise before Ravi tugged his sleeve down.

“Okay, Ravi, let’s do this…I have a small Gada. When I was your age, I pestered my father to teach me wrestling and he kept on refusing. Your Baba bought this Gada to cheer me up and I played with it for many years until I started wrestling. You can use it …come, I’ll teach you now.”

A little later, Chachu left Ravi to practise his moves but not before warning him, “Remember, Ravi….the Gada is only for your exercise. You must never use it on any person, alright?”

From that day onwards, Ravi spent a few hours every day at the akhada, exercising with his Gada. Being a smart boy, he also tried some of the other simple wrestling moves he’d seen the students perform.

The day school reopened, Ravi waved goodbye to Chachu and Dadi and walked slowly under the weight of his bag. Around late afternoon, one of the wrestling students burst into the akhada, yelling for Chachu to hurry to the school playground. A strange scene met their eyes when they reached there.

A heavily built boy with a menacing look was advancing on Ravi who was bent over his bag in a prayerful stance. “Look out, Ravi,” screamed Chachu when he saw the boy begin moving his arm to throw a punch. With a deft movement, Ravi stepped to his left even as he nimbly struck out his right foot, tripping the big boy and sending him careening down. Dazed, the bully slowly picked himself up and walked away, red-faced.

As they walked home together, Chachu threw a questioning glance at the bulge in Ravi’s bag. Ravi smiled at his uncle. “Your students are right, Chachu. Hanumanji’s strength does flow through those who practise with the Gada.”
Posted by Anu at 12:23 4 comments: