There’s a washbasin in a little space just outside my staffroom in college. About a month ago, the tap in this washbasin developed a problem – it continued to drip even after being turned off. If there’s one thing that sets me on edge, it is the thought of water going waste when so many people in this world struggle for a mere few drops of it.

Years of living in a house where taps tend to drip because of “washer” problem came in handy. So, when I noticed this dripping tap, I realized what the problem was. Years of living in a house where the lord of the house is absent-minded enough to leave perfectly ok taps dripping and also least inclined to get leaking taps repaired also came in handy. So, I knew how to arrest the drip in the faulty tap. Not rocket science. Just a small twist in the anti-clockwise direction after first fully closing the tap.

But I realized this couldn’t be a long-term solution. And I was optimistic an institution wouldn’t be as laidback as the lord of my house. So, I spoke to someone in the office and brought the dripping tap to the notice of whoever was supposed to deal with such things.

Soon, I realized my optimism was premature. No one came to repair the leaking tap. And water continued to be wasted, as people (not as experienced as me with a leaking tap) didn’t bother to try to stem the outflow after using the tap.
One day, unable to take the torture of the dripping tap, I decided to do what little I could. I put up a poster right above the washbasin. With my rudimentary drawing skills, I depicted how the tap’s dripping could be arrested. 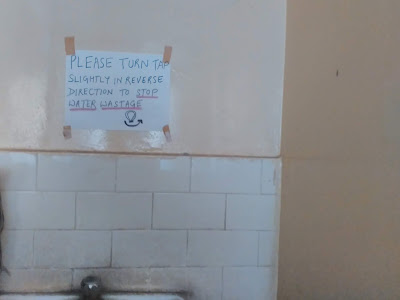 The very next day, a teacher from the cubicle adjoining mine in the staffroom, gushed about how doing what that poster explained, ‘worked like magic’ to stop the leaky tap! I managed to accept credit for the poster while battling the jealousy that sprang unbidden at an inference my mind drew - her not knowing about leaking taps indicated the lord of her house took his responsibilities quite seriously! 😑

As the days passed, I found myself keeping a close watch on that tap. And it was quite obvious that except for the sweepers who didn’t know to read, everyone else was following the instructions on the poster. So, I demonstrated to one or two of them.

A few days later, as I thought of writing a blog about this, I chanced on a video and an article that explains what one man is doing to save water.

80-year-old Aabid Surti has helped save 10 million litres of water by going around with a plumber and volunteer and fixing leaking taps!

Read about it here, or watch this 2-min video

One drop at a time, he’s helped save a precious resource from going waste by just doing a 'little thing' he believes in.

As I ponder over all this, I’m reminded of a famous poem titled 'Little Things'. 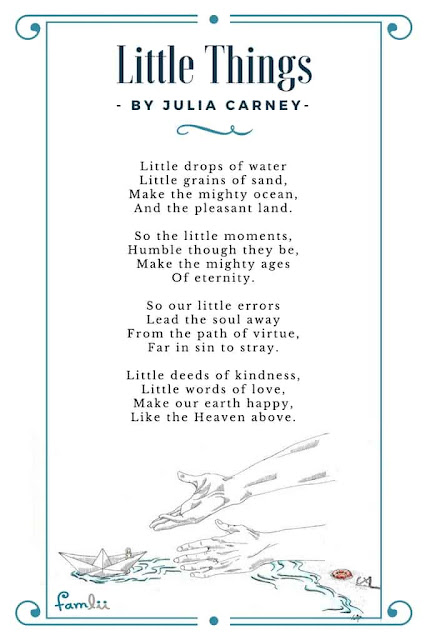 I haven’t written a blog post in months because I’ve been busy, preoccupied, and in a slightly “focus-on-what’s-really-really-important-things-in-life” mode.

But then, people have been asking when I’m going to write again, and as I read that poem, I realize that the things I write are also one of the “Little Things” that make a difference to the askers.

And, as I re-experience the sense of joy and peace that comes out of writing this piece, I realize that this “Little Thing” of writing does indeed make a big difference to my own life, too.