Setting up the photo of Lord Rama flanked by Seeta, Lakshmana and Hanuman.

Adorning it with flowers.

offered to God and later partaken by us. 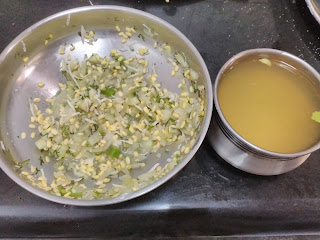 Singing bhajans with parents and sisters.

singing songs highlighting the key events in the Ramayana. 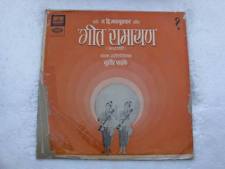 My dad always insisted on singing one particular song – the

one in which Rama consoles Bharatha and convinces him to

rule Ayodhya for the 14 years of the vanavaas.


This song is placed in the situation where Bharata

reaches Rama in the forest and begs him to go back

to Ayodhya, lamenting over the gross injustice done to

Him by Kaikeyi and Dasharatha. Rama, in his answer,

consoles Bharata with these words on the ephemeral

nature of this world and its happenings.

My translation does no justice to the beauty of the Marathi

(not Sanskrit) poetry…and although it seems like a fatalistic

take, the poetry is much more than that..it consoles the

listener to not lose heart but bear the troubles that are

beyond his control with a stoic attitude…

The living are born to grief, Bharata. It is no one’s fault.

The mortal, son of man, is bound to fate. No one is to blame


By birth we are bound to life and death. This world that we

see and sense is perishable

O crazy one, why do you grieve for the fruits of this dream

The mortal, son of man, is bound to fate, no one is to blame


Which living being escaped the cycle of ageing and death?

Did anyone live this life free of sorrow?

Every thing in the present is moving towards a gradual

The mortal, son of man, is bound to fate.

No one is to blame

I didn’t realize it then, but I do now – this song is actually

almost a summary of the philosophical outlook on life that

about singing this song to draw courage and faith from those

tenets. But whether he intended it or not, in the process, he

ensured that those words sowed the seeds of the same faith

and courage in the innocent minds of his young daughters.

Name and surrendering to Him..joy that is so much beyond

that which wealth can provide.

Travel to the city of King Raghu,

Sing, lads, the chronicle of Rama.


In the houses blessed by sages, on the estates of noble people,

On the byways and highways, may your singing freely


Do not accept money or gold,

Neither donation nor remuneration.

What is the value of wealth to ascetics?

Offer all desires to Shri Rama!


Of all the things they gave us, indeed, the best gift my

firmly grounded in devotion to God. Through the way they

lived – and continue to live – in the spirit of “Simple living,

high thinking, and prayerful doing” they taught us that we

must perform our duty in the best possible way and yet,

surrender ourself to His Will.

And every Rama Navami is an occasion to renew that

unspoken pledge to continue on the path that our parents -

Commemorating One Year of Anu's Words

Had I been Sagarika Ghose, this would have been the headline I’d have used for this blog post.

Fortunately, I’m not her. I have no agenda to further, no TRPs to gain, no individual to bash.

Even more fortunately, my audience is made up of wise people who are here by choice to hear what I have to say without being swayed by sensational headlines.

By the way, what the headline says is not entirely false; but it isn’t the entire truth, either, as you will discover later in this post.

On a relaxed Wednesday afternoon, 11th March, 2015 to be precise, the first blogpost on Anu's Words went live.

At that time, I had no real sense of what the blog would do to the world. I knew nothing of who made up that world; I had no inkling of how it would respond. The response came in bits and spurts and it was encouraging enough to spur me to continue writing.

Thinking more about the blog, I realized that I wanted it to serve as a source of positivity to help readers on their life journeys. So the next few posts were along the lines of giving out advice such as How to become resilient and The joy of giving.

Exactly a month after my first blog post, on a whim, I penned my first post that was a spontaneous sharing of a personal experience with a semblance of self-disclosure.

To my vast surprise, it was quite a hit with readers and made me realize that perhaps, some messages get across better when you talk of your experience and let readers draw their own conclusions rather than preaching something to them.

Some blog posts were an experiment – writing about my learning from a simple day out, hosting a friend’s first piece of writing and giving words to eccentric thoughts.

And then, again on a whim, I decided to put down my travel experiences in the northern part of our country as a series of blog posts titled Yaatra 2015, in 5 parts, with my nephew Shreeharsha too pitching in with a post on the journey to Haridwar and Rishikesh. Although I never considered myself a travelogue writer, I realized that these posts too touched a chord with readers, generous dollops of philosophy and spirituality notwithstanding.

Over these 25 posts in the last one year, I’ve come to realize that there cannot be one formula to ensure people love your writing. Another big realization is that sometimes, the fact that they like you means they are open to enjoying whatever you write – whether it is about current social situations
or your intensely personal experiences.

As the blog neared its first anniversary, I found myself wanting to know more about my readers’ opinions. Of course, I did have a general idea from the comments some left on the blog itself and others shared with me on Facebook and WhatsApp. But there were specific queries I had and so, I created a questionnaire to get feedback. I sent this to around 60 people who were reading my blog for more than 6 months.

I don’t know the statistical implications, but I was thrilled that about 50% of them responded. I used a Google form for the survey and the results showed up as neat pie charts summarizing the data collected. Maybe there is a way to integrate that with the blog but being tech un-savvy, I had no idea of how to do that. A cursory Google search showed that I would have to enter the data into an Excel sheet and create the pie/other chart myself – an action for which I have no inclination and therefore, no time.

So, I took the easy way out of using screenshots of the pie charts directly from the survey results which, for all practical purposes, effectively conveys my findings.

Getting back to that headline “Only 1 person feels Anu writes well”…here’s the entire infographic …and you can judge for yourself why I said the headline is neither entirely true nor entirely false. 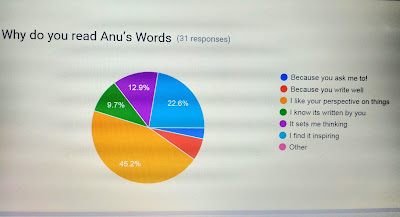 However, jokes apart, it is immensely overwhelming and humbling to know that close to half of my readers like my perspective on things and close to a quarter of them find my blog inspiring. Now, I feel like I have to be even more careful about what I say because of the value that people attach to it.

I’ve always had a suspicion that Facebook has so much of an information overload, that the chances of people really noticing you are very slim unless you are a celebrity. My survey kind of corroborates this view with more people saying they find out about new posts on my blog through WhatsApp. 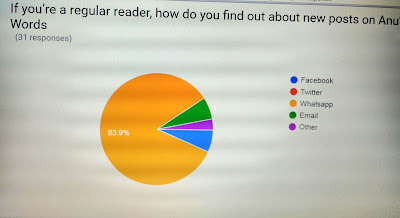 Of course this, again, is a Sagarika-esque kind of conclusion because I’ve not analyzed if I have more friends on WhatsApp than on Facebook. 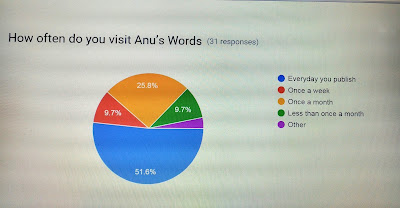 This gives me a nice feeling because to me, it sounds like they’re saying, “Hey, you are important to me.” What bigger motivator do I need! 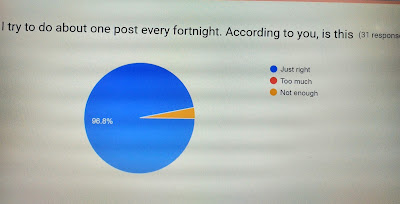 – because, a whopping 96.8% readers also felt that the current frequency of posts – about one every fortnight – is just right. OK, I got that.

My alerts to new blog posts invariably ask the recipient to read AND share…but it looks like not many are doing the latter. 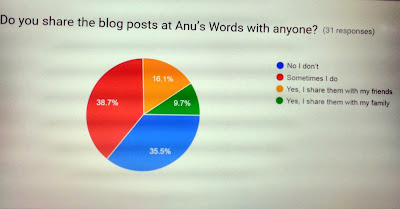 Only a quarter of readers share the posts with family and friends. The remaining are sharing occasionally or not at all. Now, this could be because of two reasons – either, they don’t feel like sharing it or they don’t realize they could share it.

Eternal optimist that I am, I’d like to assume it’s the latter factor at play in most cases and therefore, request those people to please share the blog posts because it’s just another way of spreading some positivity to your family, friends and colleagues.
Anyway, there is no monetary angle involved so, I’m guessing that most people won’t really take offense. At the very worst, they won’t read it and that shouldn’t really matter to you.

But I’m also a realist and this means I must say that if anyone out there feels like not sharing the posts, I’d like to know the specific reason so that if it is something that can be corrected, I’d get to work on it.

In the survey questionnaire, I slipped in what may have seemed like a red herring by asking how enthusiastic the readers would be if I had to write a book. The answers to that have been most illuminating…. and satisfying. 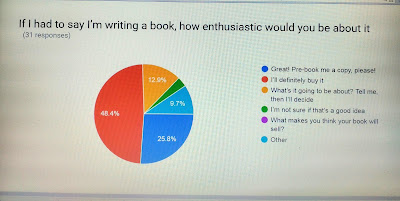 A quarter of my readers are ready to pre-book a copy and about half of them say they will definitely buy it. Thankfully, no one chose the option of “What makes you think your book will sell?” And I’m going to use that as a sign from the universe that I must write the dream book that has been in the pipeline for the past 3 years.

When I started blogging, I never knew what my style of writing was called; in fact, I didn’t even think I have a style of writing. Some reader called a certain piece a wonderful example of “reflexive writing” and I had to google the meaning of it.

Even now, I’m not sure if there is a definite style I have – all I know is that what I write is a reflection of who I am. And that’s good enough for me – and, possibly, for you too, dear readers. And yet, because it is important to grow, I am also taking Ben Yagoda’s advice. 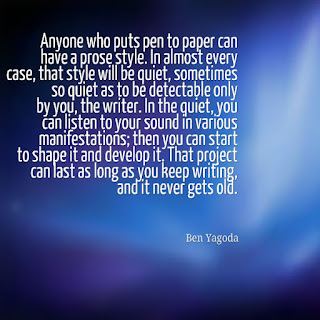 I take this opportunity to thank all of you dear readers – those who participated in the survey, and the several others who are more recent followers of Anu’s Words. The fact that you read and interact with me and the love and encouragement you offer has made blogging one of the greatest joys in my life, leading me on to experiences that I would never have had otherwise.

Thank you, once again, and I look forward to continuing this relationship through all the years and new blog posts yet to come.
Posted by Anu at 13:08 4 comments: