A few months ago, I noticed my sister’s peculiar behavior on Whatsapp. She was online but was taking much longer than usual in her replies to me. Clearly, she was preoccupied and when she told me the reason, I found it quite puzzling…what would she find in common to chat about with her batchmates from Goa Medical College after a gap of some 20-plus years?

Just some months after this, I watched a friend get excited about catching up with school mates on Whatsapp and meeting them at a class reunion – again, some 20-plus years later.

I wondered what could be the motivation behind such emotion. And put it down to the rather obvious extrovert nature of these two people. I remember also a sense of smugness in telling myself that this would never happen to me. I had better things to do than chat like a teenager with not a care in the world.

Today, less than a month after I got pulled into a Whatsapp group of St. Mary’s High School Class of 1991, I’m not so sure. Okay..I still don’t chat like a teenager but am finding myself spending quite a few minutes every day catching up with things happening on the group and posting more than an occasional comment. And judging from the comments my activity has invited, it looks like I’m not the only one overwhelmed at this turnaround.

The group admin commented that she is quite surprised to see the level of my interaction. Perhaps others too felt the same but held back from saying it aloud. Nothing startling in this response considering that they last knew me as a studious and silent 15-year old who seemed more inclined to academics than talking or having fun in class. 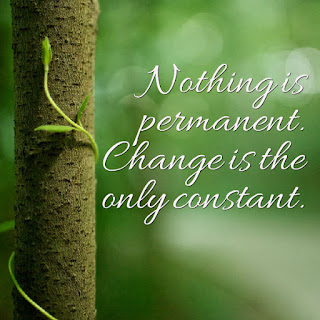 Today, almost 25 years later, a lot of water has flowed under the bridge. If a silent girl has turned into an expressive teacher, there is also


Change is the only constant, they say. Sometimes, we change willingly; at others, we are forced to change and in some rare cases, we may even refuse to change. Circumstances we endure, situations we experience, people we meet, books we read, conversations we have, the thoughts we form…all these contribute to making us the individuals we are. What I am today is the sum of all I have been through and not everyone can possibly know or understand what that is. They only see this me after a long gap and I seem like a different person now.

What is astounding though, is that, despite the distance in space and time, there is a camaraderie that exists between us. Maybe it is because of the distance that it exists…after all, they do say that absence makes the heart grow fonder. Maybe during the innocence of those childhood days, we forged bonds strong enough to endure the vagaries of time. Or maybe it is just the fact that we are able to respond with unconditional positive regard to these friends (and receive it from them, too) that makes the interaction predominantly pleasant. That you don’t actually live with them day in and out and that some important decisions in your life are not influenced by them, also contribute…reality is always glaring in its clarity as compared to the rosy tint that seeps in when viewing someone from a safe distance.

When I was 18, I was once asked, “How much do you think another person is important to your happiness?” I remember defiantly saying, “Maybe just about 10% - mostly, I’m the one solely responsible for my happiness.” Today, I’m not so sure of that answer and cringe at the naïveté with which it was uttered.

For I have come to realize that in the process of being responsible for our happiness, we often tend to base our attitudes on the way others treat us or think of us. Which is precisely why it is easier to be happy when we get positive inputs from those around us than when conditions are not so conducive.

Now I know what got my sister and my friend hooked. The reason why we make time for people with whom – ostensibly – we now have nothing much in common. They represent to us a period of our life that will never come again….a time of innocence, a time when we did not know what the future held but which we fondly hoped to be full of promise. And maybe in relating to them today, after all the initial surprise of how things turned out for each one has dimmed, we are left with a quiet joy that for all the trepidation of youth, things did turn out right for us after all. Maybe this promise will give us the strength we’re looking for as we dither over the choices of today.

There’s talk of a class reunion next year. People are working out dates and venues. Classmates from outside the country are making travel plans. I’m no extrovert…but I find myself getting caught up in the enthusiasm. I know I have to write my psychotherapy exams in about 10 days time and am not as prepared as I would have been in my student days. Yet, the urge to reach out and share these feelings and thoughts is such that I’m taking time to write this and dedicate it to these wonderful classmates of mine.

Because the naïveté of the past has gone as has the smugness of a few months ago. Because I now fully understand that I am as much a result of the people around me as of my own efforts. Because I have realized the need to grab this moment and make the most of it – for it will never come back again.
Posted by Anu at 12:29