Once, a group of people were sitting in meditation. A wily young boy walked in and was amused looking at all these people sitting silently with their eyes closed. Wanting to have some fun, he impudently poked the foot of one man with a needle. The man did not react. The boy was fascinated and also emboldened and went on to do the same to all the other people. None of them reacted either.

If you expected to read that the boy had a change of heart and realized his folly and sat down to meditate with the group, you’ve been reading too many motivational stories.

The Guru conducting the meditation session saw what was happening and waited. The boy wanted to see how much pain he could inflict and get away with. He kept poking repeatedly and then, people began to wince and wriggle but still, no other overt response. After a while, the Guru reprimanded the boy and sent him away.

He then asked the group why they did not stop the boy when he was obviously hurting them. The answers ranged from
“We must ignore pain when meditating”
And
“I believe in non-violence”
To
“I was focusing on stilling my mind rather than worrying about the outside world”
And
“I thought he will be transformed when he does not see me responding”

The Guru then explained how the lack of response did not bring about any transformation as hoped for; only his reprimand caused the boy to stop hurting them. Besides, how can someone meditate in peace when experiencing distress that is real and immediate?

This is a story that I was fortunate enough to hear as it was recounted by His Holiness Sri Sri Rangapriya Maha Desikan about 10 years ago in Bangalore. Swamiji was talking about the importance of Kshatriya Dharma – the act of standing up against injustice - to protect an environment that is conducive to spiritual practice.


Today, as the intolerance debate builds up on Indian media, I am reminded of this story. I’m no savant, but with all due humility, I think in today’s times, there would have been a twist in Swamiji’s tale. The wily boy would not have quietly slunk away after being reprimanded; instead, he would have stood taller, gathered a group of supporters who knew nothing of the incident, and they would have collectively whined, “This is intolerance” and called the meditation group “Sanghis.”

In times of yore, there was a snake that bit villagers passing by the forest path where it lived. A saint passed by, taught the snake a mantra and asked it to repeat that all the time and avoid harming people. Thanks to the effect of the mantra, the snake became more and more saatvik and stopped reacting when people came near it.

Over time, as the villagers noticed the reticence of the snake, they grew bold enough to attack it even when it was quietly lying in its hole. When the saint passed that way again, he noticed the weak and injured snake lying close to death and asked what happened. The snake recited the entire story to which the saint explained, “I only said not to bite; why did you stop hissing…keeping yourself safe is important too.”

Had Aamir Khan and Kiran Rao lived during those times, it’s quite likely the hissing snake would have caused them to fret over the safety of their child. Notwithstanding the fact that they lived far from the forest and had all the facilities their riches could buy and had never actually encountered the snake ever. 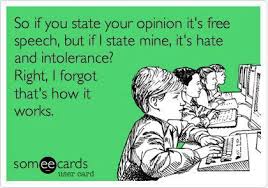 I’m not one to wantonly say, “All is well,” but given that no country is devoid of snakes; isn’t a merely hissing snake safer than a biting one?

A few days ago, I asked a cousin’s kid who studies in a well known convent school in Bengaluru to recite her school prayer. And noted that it praised and prayed to Our Father in Heaven, the school’s founding Mother and exhorted the kids to be good and work hard. No prayers in Hindi or Sanskrit or Kannada, she said. The prayer my son repeats every day in his school run by a Hindu “forward caste” management trust, includes lines to the effect of saying “You, the same Lord, are known by different names as Ram, Allah and Jesus.”

And I have no qualms about it.

I’m proud of belonging to a culture which has taught me this acceptance – which, incidentally, is a step ahead of mere tolerance.

I’m not insecure that what some pseudo-intellectual or pretentious movie star says will defame or ruin what I and my country stand for. But that does not mean I will ignore it either. In keeping with Swamiji’s message, I feel it is necessary to assert myself…to say I don’t agree when one of these motivated individuals say that my country and its people are intolerant. 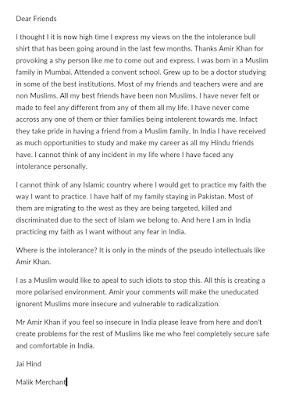 And I know I’m not so important, but before someone decides to apply this label to me, I’d like to mention…this blog post is not a bite….it’s only a hiss.
Posted by Anu at 00:05