Of Childhood and Colourful Ambitions

It was Ranga Panchami – the day of the Holi festival. Classes had been suspended for students of my college because we have many North Indian students for whom it is a major festival. However, the management had extended no such relaxation for the students of the other institutions in the same campus or for us teachers. 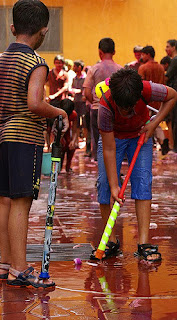 As I sat grading answer papers in the staffroom, the office attender who came with a cup of tea remarked in passing that my son was having a gala time, playing Holi with his friends. She said she’d seen a huge group of kids and teenagers outside my house as she passed by it on her way to the tea stall.Engrossed in trying to make sense of an illegibly scrawled answer, I just nodded absent-mindedly.

When I reached home for lunch, I noticed the entire front portion leading from the gate to the main door was covered with puddles of colored water. Although my son was nowhere around, there was a stained t-shirt and shorts left soaking in a bucket in the bathroom. My father-in-law who was at our home that day, said the kid had bathed, had lunch and gone to a friend’s house nearby. I found all the taps had run dry and requested the neighbor who lives in the house above to kindly switch on the motor to fill the overhead tank. My neighbours are an elderly couple and Uncle did as I asked.

Later in the day, when I got back from college, there were currency notes and coins, totalling about Rs. 47/- lying on the dining table. When I asked my son about who had left it there, he proudly claimed it to be his first earning obtained by providing a service. He even went on to say that it would have been higher, but he had to share some part with his friend. I asked him for the details and slowly, the entire story emerged.

His friend had come home with the colors and they had played Holi outside the house. A few minutes later, a group of about 6 – 10 college-age boys had passed by, their clothes, arms and faces fully stained with the festive colors. Noticing the tap outside our house and seeing my son and his friend using the water to clean themselves, the youngsters had also come forward to use the water.

My son and his friend set themselves up to ration the water to them – for a princely sum of Rs. 5/- for two mugs of water. As time passed, word spread to other kids in the vicinity that there was a place close by where you could clean up to some decent level before proceeding home and so, the water business outside my home had boomed. Since my son and his friend had both done the hard work of counting out and pouring the mugs of water, keeping tabs on who used how much, and collecting the money, it was decided that the entire amount collected would be divided equally among them.

I was appalled to think my son had “sold” the water. I asked him why he had not let the kids simply use the water instead of charging them for it. When the reply came, I looked at my kid with new eyes.

My son knew the water level in our overhead tank was less because I had warned him to use minimal quantity of water. But in the demand of the youth, he saw an opportunity to counteract any after effects. His logic – even if the water in the tank got over, he would have at least generated enough revenue to buy us some bottled water to last till the end of the day when water supply was to be restored! Besides, he thought that Amma will not be irritated when she realized that her son had acted on her mantra often passed on to him – “every problem had a solution”!!

Later in the day, my neighbor Aunty came and enlightened me on yet another aspect of my son’s entrepreneurial venture that he had “forgotten” to mention. After a while, the “water business” had been forced to stop because the tank had emptied out. When the tap had run dry, my son had gone to Aunty and requested her to switch on the motor to pump water into our tank, offering her his entire share of Rs. 47/- to compensate for the electricity and water charge that she would incur!! Aunty had refused to do as he asked because she didn’t want him squandering the water. But she told me she was quite impressed with his act and even added, “See how smart he is! I’m sure he will never in his life be cowed down by difficulties!”

As I narrated this entire chain of events to my husband, we wondered at the workings of a 12-year old mind. And then, I learned of something else. It seems just that morning, as my husband read the newspaper, he had drawn the kid’s attention to a teenager in the UK who had developed some app and monetized it. I couldn’t help but wonder – had that bit of news motivated our kid to develop this sudden “revenue-generation” desire?
Posted by Anu at 14:47