This image circulates a lot on social media. 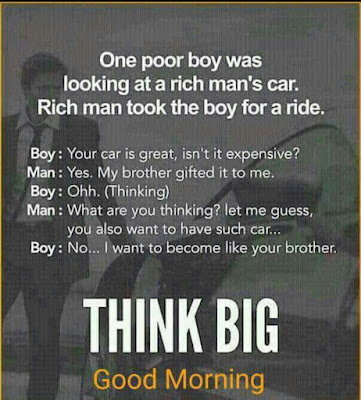 Every single time I see it, I wonder what the poor boy meant when he says, “I want to become like your brother.”

At first glance – especially going by the caption of “Think Big” – it looks like the boy is aspiring to be as rich as the brother being discussed. A guy who is so rich that not only can he afford to have an expensive car, he can also afford to gift it to someone.

But every time I read this message, there’s another interpretation that comes to mind. And that is based on an observation I’ve made over the years, looking at people who grow richer over time. Of course, there will be exceptions to my generalization but many times, I’ve found that as the capacity to give increases, the willingness to do so, decreases.

So here’s the alternative interpretation I find in this picture.

I like to think that the boy is aspiring to become like the rich brother who isn’t attached to his possessions, his riches – a person who has no qualms about giving an expensive gift…one who thinks so big, that there’s no concept of holding on to something saying “It’s mine – only for me.”

Another vignette that keeps circulating on social media says it best.

A person chanced on a saint. Looking at the sparseness of the saint’s hut, he asked, “Where are your possessions?”

The saint had a counter-question, “You don't seem to having a lot of luggage?”

The traveler laughed, “Why would I ? I’m just passing by!”

To which, the saint smiled and whispered, “So am I.”

Perhaps we can't all be the saint....but maybe we can at least travel light like the passer-by?
Posted by Anu at 12:49