I receive a call from Vidwan Shri. Ganapati Bhatt, the Samskruta teacher at S. Cadambi Vidya Kendra, where my son Sanath did his schooling. Just the previous day, we have received the school’s letter inviting us for the annual day to be held on 21st December. Sanath is to receive a merit prize for being the school topper in the May 2018 SSLC exams.

I assume the call is to confirm that we received the letter. And then, the unimaginable happens. I’m asked a question that leaves me flabbergasted. In my shock, words tumble uncensored from my mouth. “Why me, Sir, I’m sure you can find someone really good to come as Chief Guest!”

Pat comes the reply, “It’s because YOU are really good that we’re asking, Madam!”

Things move very fast after that. I’m asked to send my biodata. Within the hour, Bhatt Sir and the Principal Smt. Jayalakshmi Sharma turn up at my college with a letter of invitation, requesting my presence as the Chief Guest. There’s another request they have – I must keep this news a secret from Sanath. They want to surprise him on that momentous day.

“A student getting the prize from his own mother will be a historical moment,” they gush.

I agree because I don’t want to deflate their enthusiasm. Deep within, I wonder if this whole setup will be an intrusion on his moment of glory because teenage is a time when you want to establish an identity that’s independent of your parents. Because, although I don’t let it go to my head, the fact remains that people get impressed by me and my talk.

Anyway, there’s no point in worrying, so I do what I usually do when I can’t figure things out – leave it to Krishna.

On December 21st, I make up some story to avoid accompanying Sanath to school. I reach there alone and am given all the honour due to the Chief Guest. I do all the things someone in that role is expected to do – lighting the lamp, garlanding the founder’s statue, giving away the merit prizes, and addressing the gathering.

Sanath receives a hero’s welcome when he comes on stage.

The ‘historical moment’ passes in a blur, but I notice that the kid who usually touches the feet of the guest from whom he receives a prize, hasn’t done that this time. Did he think, perhaps, that after all, the Chief Guest is Amma only? 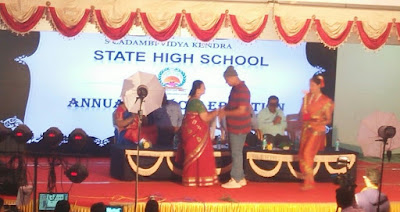 By the time I get off the stage, he’s rushed off somewhere with his old school friends who’re now spread out across different colleges. They’re going out somewhere, and although he does call a few times during the rest of the day, it’s only to ask me to make some Paytm payment at an eatery/for the autorickshaw.

Later at night, we finally get to actually talk. Yes, it had been a surprise for him. But he doesn’t seem to be affected by it in any way – he is neither gushing with joy, nor does he feel I’ve intruded. He’s basked in his moment of glory and is happy about it. His friends have stayed back to listen to me speak and told him, “Your mother is superr!! Her speech was very informative.”

Where was he, I ask. Because he’s used to Amma’s talks at home, he had walked outside to catch up with yet another set of old friends – the security guards who’re standing outside the venue!

For the umpteenth time, I send up a silent ‘thank you’ to Krishna, for this cool teenager.