I hope you enjoyed the last post on our visit to Haridwar and Rishikesh. Indeed, Shreeharsha covered all aspects in such detail that there is nothing really left for me to add.

So, on to Day 6 and our trip to Kurukshetra – a place that occupies an indisputable significance in the Hindu psyche for having been the site of the Mahabharata war which established the supremacy of Dharma.

We set off early along with my sister, brother-in-law, Shreeharsha and a relative who was using their home as a base during her internship in one of the law firms of Delhi. It being a Saturday, traffic was light and we reached Kurukshetra within 4 hours, including a 30-minute break at a local dhaba to savour the famed paratha. At the dhaba, just as we were about to settle our bill, 2 plates of jalebi materialized at our table. Apparently, in an attempt to indulge my brother-in-law’s sweet tooth, my husband had ordered 2 jalebis….but then, people from that part of the country probably have a unit of measurement quite different from us South Indians with puny appetites.

On reaching Kurukshetra, we first proceeded to the Brahma Sarovar which Wikipedia says is “supposed to be the world’s largest man-made pond.” We were told that pilgrims throng the place on the occasion of a solar eclipse because bathing in this holy pond is believed to free people of sins.

Now, there are people who pooh-pooh this belief. How can washing in a place – which itself may be polluted – serve to wash sins away? We have conveniently chosen to hang on to the most superficial of aspects, without sparing a thought for what it actually implies.

Well, the teachings of Sanatana Dharma are made up of different layers and designed to benefit the followers at the physical, emotional, social and spiritual levels.  I’d like to humbly attempt an explanation on the emotional aspect only of this particular belief.

When we are told that our sins will be washed away by doing a particular act, it does a few things for us at the psychological level:
First, we feel we are forgiven – and forgiveness from an outside entity helps us in forgiving ourselves. In turn, this enhances our sense that all is not lost; that there is still scope to improve and make amends for the wrong we have done.

Second, feeling remorse is the key to not repeating errors. When someone regrets his sins and makes the effort to travel to a holy place and bathe in a holy river, the seriousness of his misdeeds is driven home with greater impact. This awareness is supposed to motivate him to stick to the right path in the future.


Of course, I don’t know how much this holds true in today’s times when journeys to most pilgrimage places have now been rendered ridiculously easy thanks to better transport, infrastructure and technology. Trekking for days together, braving inclement weather, wild animals and dacoits and depending on the hospitality of strangers is definitely more remorse-inducing than a helicopter ride or an e-darshan from the comfort of your home.

Cynics choose to view such belief systems in an Arnab Goswami-esque way by focusing on a part of the entire teaching instead of the whole. For example, there is a story in the Skanda Puran where a dialogue between Lord Shiva and Parvati clearly indicates that merely bathing in the Ganga will not help one wash sins away or attain Moksha….but how many of us even know of it? 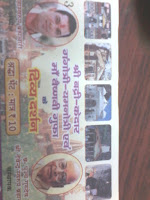 After paying respects to the deities in the temple located within the Brahma Sarovar, we visited a shrine established by the Shree Jayaram Vidyapeeth where the four Vedas are represented as four deities. A highlight of this place was our walk through what is called the Char Dham Yatra Divya Darshan  – a depiction of the holy places of Kedarnath, Badrinath, Gangotri and Yamunotri – and the caves which have been fabricated to simulate the shrine of Mata Vaishno Devi in Jammu. Someday, with His blessings, I hope to make the journey to these places too.

Next, we visited Jyotisar, the site where The Song Celestial – Bhagavad Geeta – was delivered by Lord Krishna to Arjuna. We did a pradakshinaa of the holy Peepal tree which is said to be the sole existing witness to the Lord’s message. As we went around this tree, I remember praying for at least some of the wisdom to rub off on to me to make this worldly journey smoother and worthwhile. Even as we sat down to do a symbolic recitation of the 12th chapter of the Bhagavad Geeta, the place was besieged by two busloads of tourists from Tamil Nadu and the ensuing cacophony made us rush to the next place on the itinerary – the Bhishma Kund at Naraktari. 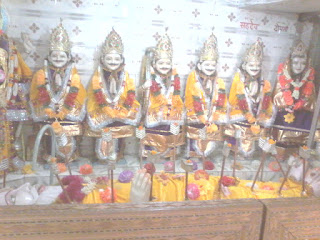 The spot where the mighty Bhishma fell on the 10th day of the Mahabharata war, is marked by a small water tank called the Bhishma Kund and a temple that houses idols of the great warrior with Krishna, the Pandavas and Draupadi. We were told that the water of the Bhishma Kund is Ganga Mata herself, who came at Arjuna’s request, to quench her son’s thirst as he lay dying on the battlefield. The place is significant as the site where the VishnuSahasranaama Stotra came into existence in the form of advice given by Bhishma to Yudhishthira. 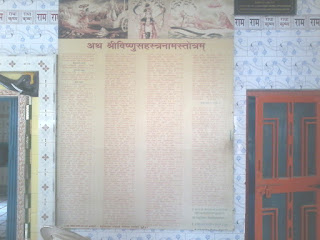 We were able to sit calmly and recite this stotra, feeling blessed to be able to do so at the site of its origin. As we neared the end, the same noisy tourists caught up with us but luckily, they straggled in as ones and twos and were surprised into silence by our recitation. My son, of course, found his own way to partake of the holiness of this place – by bathing in the Kund along with some local kids.

Post-lunch, a glorious two hours were spent in appreciating the artifacts in the Sri Krishna Museum which has a total of six galleries. 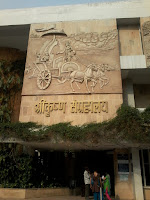 This museum boasts of a wide array of sculptures, pottery, bronze castings, terracotta artifacts, miniature paintings, artifacts obtained from underwater excavation in Dwaraka and of course, an unforgettable Multimedia Mahabharata and Geeta Gallery.

By 7 pm, we were back at my sister’s house and it was time to finally pick up some gifts for folks back home. There is a local, colourful, noisy bazaar near her house selling every possible thing one could want or need. This bazaar is held on Saturday and is therefore, called Shani Bazaar and me and my sister spent an hour here making a few purchases. Yes, that’s right – just one hour….because I knew exactly what I was looking for and I’m not equipped with the normal womanly trait of a love of shopping and impulse buying.

Sunday was the day we had reserved for the Akshardham temple at Delhi but we thought better of it for a few reasons. For one, the entire week had been spent traveling, leaving us with very little time to spend with our loved ones at home. Secondly, our flight – wonder of wonders – had been rescheduled to depart a good four hours earlier. Thirdly, “timeless” people must not aspire to do as much as punctual people do :-) 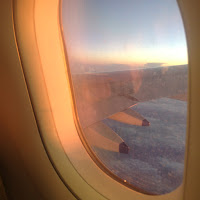 But time flies fastest when you most want it to slow down. Too soon, our cab to the airport had arrived; we had bid our farewells and were on the flight to Chennai, watching a golden sunset from a vantage position. An overnight stay at a hotel in Chennai and an early morning journey by Shatabdi later, we were back to what is (to us - and all the discerning people it has attracted from all over the world) the best place on earth – our naturally air-conditioned home city of Bangalore.

Surprisingly, there was none of the fatigue that comes with traveling for extended durations. This trip was an eye-opener to several things – the beauty and grandeur of our motherland, the unshakeable faith that sustains billions of Indians and most importantly, a window into my own inner self. Before we left, I had resolved to stay focused on traveling as far within as outwards and thanks to His immense grace, there were multiple spiritual experiences that have taken me one tiny step ahead on my journey towards the divine.

The biggest learning was from Mata Ganga who is as graceful as She is powerful. Who, even as She surges ahead, gives the impression of being firmly rooted. Who unquestioningly embraces all that comes Her way and makes it Her own without ever losing Her own identity.

Over the past few months, I have found that just picturing Her in my mind’s eye is a hugely calming experience. One that leaves me feeling energized to meet the ever-burgeoning demands on my time and abilities. One that elevates me above the pettiness that comes so naturally to the human mind. One that keeps reminding me that I am – first and last – a Seeker on the path to Satchidananda.