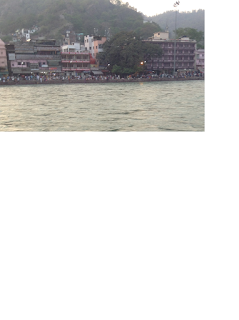 And now, it is time to talk of the highlight of the trip in many ways - our visit to Haridwar and Rishikesh...those holiest of holy places that literally swept us off our feet. And the surprise I promised in Yaatra 2015 - Part 3? A refreshing take on our experiences through the eyes and voice  of my young nephew Shreeharsha - a techie turned MBA, who is also a writer in his own right.


"The sea: Till when will you keep pouring all your water in me?
The river: Till you become sweet.”

In our case, we ask the Ganga till when she plans to flow, she says, till I take up all your sins.

The Haridwar and Rishikesh trip was my pet project. Mom had put me in charge of doing all the research and planning the trip with my aunt, uncle and cousin. It would be my first overnight trip after moving to Delhi.

A little time surfing the Net showed up many trip plans - some even did it in 24 hours and just cost about 1000 rupees. But for us, soaking in the holiness of the place took priority over time or money. So we decided on a peaceful 2 days and a chose a comfortable cab best suited for us.

We started off early in the day. The ride was on time and as ever I was not. Luckily this time around I had my uncle to share the podium of the “timeless” people. Thanks to the lack of traffic, we made good time. Sticking to my reputation I got sick once in the car before breakfast. To avoid any more episodes I decided to take a long nap till we reached Haridwar.

Haridwar is situated on a flat piece of land. Although it is at the edge of the Himalayas, there are very few hills and valleys in the city itself. We entered the city by noon and caught the glimpse of the Ganga as we made way towards our hotel. We checked into our AC rooms only to realize that Haridwar was a cool place and we could've done without the AC.

The receptionist suggested we have lunch at the Chotiwala hotel. I had first seen this eatery in Rishikesh 15 years ago when a real man wearing blue paint with an upward pointing choti and a south Indian attire sat at the door and invited guests. The Chotiwala is all but clichéd now with dozens of Chotiwalas all over the two holy cities.

Lunch was a north Indian version of south Indian food and following it, we headed out to the Manasa Devi temple. Situated atop the Bilwa Parvat, it is one of the most famous places in Haridwar and can be reached on foot or via ropeway. We chose the latter and were deposited at the temple in less than 2 minutes.

We bowed before the Goddess, received blessing and “beatings” from all the other shrines, made offerings, and gazed at all the threads tied to posts by pilgrims praying for this or that wish to be granted. To me, it seemed like an inventory of human greed….but if you’ve read the last part of the Yaatra series, you know my aunt’s thoughts on this…and….we’ve agreed to disagree.

From the hill, we had a breathtaking view of the entire town of Haridwar and the enormous Ganga and how she has been diverted into the ghats where the evening aarti would be performed. 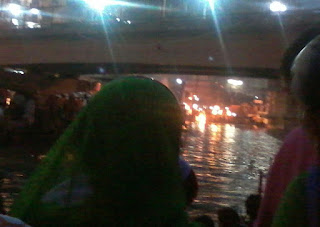 We witnessed the Ganga Aarti in the evening as it was performed by priests of the Ganga Maata temple. From where we sat among maybe 5000 people, the song was faintly audible but the flames and their reflection in the Ganga was really something. We too offered our prayers using the small aarti boat made of leaves, containing flowers and a lighted wick, watching how far in the water it went. Not that it meant anything, but watching it go felt like letting our ego and attachment to this mortal world go. Among the 5000 odd people, we suddenly felt nothing. The crowd simply faded into nothingness. We could just feel the grace of Ganga Maata and an urge to surrender.

The next day, we went early to the ghats for the Ganga Snaan. The water was ice cold, but the flow and the feeling of it being Ganga overrode the chill. I got out early from the water; one of the disadvantages of being thin is that you get cold very soon. But my cousin really had a great time.

After the bath, morning Sandhyavandanam and breakfast, we checked out of the hotel and started towards Rishikesh. The ride took hardly an hour as we passed various temples and even some south Indian establishments; in fact there were ashrams and temples from all parts of the country. Rishikesh brought out the mountains. We were officially in the Himalayas.

The city of Rishikesh was strikingly different from Haridwar. It seemed more tourism orientated with shops selling books, merchandise, accessories, music CDs among other things. There were a lot of adventure sports establishments, too and rafting, hiking and safari seemed to be very popular. Rishikesh had more foreigners than Haridwar – was it perhaps because of the numerous yoga and wellness centers promising eternal calm? Also, the ghats of Haridwar are famous only from a religious POV whereas Rishikesh is less crowded on the river bank and allows silent siesta.

We walked over the Ram Jhula and Lakshman Jhula which are suspended bridges across the Ganga connecting the city to the temples across the river. The Gita Bhawan and Lakshmi Narayan temple were the only places we visited. The boards in the Gita Bhawan were really philosophical – and I mean that in a good way. One such board read "Offer yourself and not any material article;" another visibly placed board said something like “Offer your mind, body, intellect, senses and soul here, and open yourself up to the grace of God." Reading these boards, it seemed to me like the dehydrated walk across the Ram Jhula in the blazing sun had been worth it.

My cousin made friends with touring Tamilians at Rishikesh, Tamil actor Vijay fans to be specific. My aunt and I didn't exactly warm up to this. Perhaps a giving of being adults.

Speaking to my mom just before we left Rishikesh, my aunt said she could live there forever and didn't feel like going back. I was going through the same feeling. I thought I should make a Facebook status of it. Something like "I could get lost in the ghats of Haridwar forever." Thankfully, better sense prevailed because apparently, I could get lost in Haridwar but not lose my Facebook.

Nearly a month later, Vellukudi Krishnan Swami visited Delhi. I was exhilarated and attended all the upanyaasam sessions. Since the sessions were small, he took questions. I made myself ask a small question. "It is important to walk on the footsteps of our elders as it is a tried and tested path, but in today's time, especially for the young, it is also important to keep in pace with modern rationality. How do we strike a balance between the two?"

He looked up and, with an expression that revealed nothing, said, "It will come, you need to listen more. Things won't come that easily, you need to work a little." I kind of exasperatedly wondered why gurus are always mystical? Guess they don’t believe in handing things out on a platter.

This trip had been one such battle of striking balance. Between wanting to get lost in the grace of Ganga to making the Facebook people know what you are thinking, it was a struggle. Between spirituality and society. Why can't one be a part of both?

That's when it struck me. The Ganga is praised to godliness not just because of mythology but also because of Her service to society. Spiritual gurus have, since ages, showed societies how to lead an ideal life.