Day 3 proved to us the profoundness of the quote, “Man proposes God disposes.” We left home quite early to avoid traffic and yet, got stuck for a good 45 minutes…at 7.30 in the morning. This ensured we reached Agra with the midday sun for company but that did not stop us from being enthralled over the beauty of the Taj – the picturesque mausoleum on the banks of the Yamuna. The minarets, the marble vaulted dome, the ornate spires were striking to behold. Yet, within the tomb, I sensed a kind of unsettling heaviness that kind of made me glad to move out. 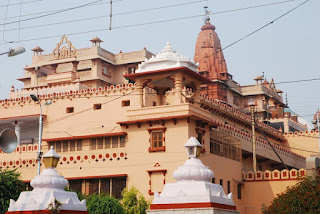 From the Taj Mahal, it was onwards to Mathura – that hallowed part of Braj Bhoomi where Lord Krishna was born. The Keshava Dev temple is built over the prison where the Lord was born and is the highlight of the Krishna Janmabhoomi complex. Entering into the complex itself, we were aware of a calmness descending upon us…mind and body seemed to slow down in complete awareness of being in the presence of the divine.

I found the simple, implicit faith of the devotees thronging to these temples quite touching. And because mobile phones are not allowed inside the complex, there was none of the obsession with photography on display. People either sat silently inside the temple or sang bhajans…both of which were conducive to a holy atmosphere.

Unlike South Indian temples, there is no concept of “archana” in the temples of the North. Which I kind of liked because it does not take one’s attention away from offering a mental prayer. Of course, the subject of the prayer may still be the same – whether with archana or without.

Quite a few cynics often point out how humans have reduced prayer to a business relationship, pleading with the Almighty to grant favors for this or that worldly desire. But my attitude is…even if to ask, at least they are coming towards a source of positivity with such immense faith and sense of surrender! At some time, He Himself will lead them further to a stage of prayer without expectations.

This is the concept of “Drishta drishya vashaat baddaha; drishyaabhaavaat vimuchyate” which means the one who sees is bound by his view of the objects he sees. When a person keeps seeing the Lord, he gets bound to Him and ultimately, this bondage will lead him to the Source itself.

And when He Himself accepts the devotees who come with requests, who am I – a mere mortal – to sit in judgment over them?

Next stop was at the Banke Bihari temple in Vrindavan where the image of Krishna is featured as being bent at three places. The darshan of the Lord in this temple is interrupted by drawing the curtain at regular intervals…the belief is that His charm is so great that ordinary mortals cannot bear it continuously. People also say that staring for too long into His eyes can cause a loss of self-consciousness.

Anyway, I did not perceive any such danger because I was following the advice given me long ago by a spiritual guide….when in a temple, look at the feet of the Lord, and try to cultivate the spirit of surrendering to them. Ever noticed how one of Lord Venkateshwara’s hands points at His feet and is inscribed with the words “Maamekam sharanam vraja”? Surrender all to me, is  precisely what the Lord is trying to tell us.

We had a singular experience while visiting this temple. My sister who accompanied us, has been to this temple about 7 times since she relocated from Bangalore to Delhi and she had never seen this temple very crowded. But the day we went, there was a huge group of devotees from Maharashtra who were there as part of Bhaagvath Saptaha ( a week-long study of the Srimad Bhaagavatam) singing bhajans and chanting the Lord’s name and it was in their midst that we had darshan of Banke Bihariji. I felt He had orchestrated this entire sequence of events for me to learn something vital.

Let me explain this. I generally avoid visiting temples when they are crowded because I don’t like the noise and the sense of chaos. But as taught by the learned ones, the Lord is happy when a devotee comes along with other devotees to offer his prayers. So, I saw this incident as a lesson in learning to disregard personal comfort and instead, focus on meeting Him. At the same time, He made me part of a crowd that was full of devotional fervor; the chants of this group were familiar to me because I had grown up listening to them (as I was born and brought up in Goa). And to my pleasant surprise, my focus stayed on the Lord and I didn’t even notice the jostling.

There were other positive results, too. The crowd was so huge that, as we walked through the narrow lanes, visibility was very limited and we were unable to perceive the surroundings… which, I had been warned by well-meaning friends, were quite dirty. Also, as this mass of humanity swept into the temple and out of it, there was no opportunity for anyone to demand any money from us for darshan or prasad …which again, well-wishers had cautioned me about. The crowd also ensured that the notorious monkeys stood no chance of approaching us to snatch our belongings away.

When people had warned me of these unpleasant aspects of the temple visits, I had not really paid attention, deciding to take it as it comes. After my experience at the temple, as I analyzed these aspects, I’m compelled to believe in the adage “Whatever you are aware of, that is where your energy goes and that is what the Universe creates as your reality.” I had made up my mind that my focus was going to be on the Lord and not the external surroundings in which He chooses to dwell…so He was benevolent enough to let me see and experience only Him without fretting over the external trappings.

Yet, I equally strongly feel that from a social point of view, it is important we respect the sanctity of such places by keeping them clean – in the physical as well as moral sense. The devotees must want to see their Lord in conditions that befit His grandeur. This can only be possible if there is actual action to maintain these holy places in good condition without raising demands for money from the devotees who flock to receive His grace.

Besides the Banke Bihari temple, we visited the Prem Mandir – a monument dedicated to divine love – established by Shri Kripaluji Maharaj. Every one of the marble stones that make up the temple has been hand-carved by artisans. This temple is located in the midst of a beautiful garden and the main deities are Radha Krishna and Sita Ram.

Unfortunately, there was not enough time to visit the numerous other significant places in Vrindavan. These, along with places such as Gokul, Nandgaon, Govardhan Parvat and Barsaana are still unchecked on our “must visit” list and I only pray He sees fit to ensure we do so in this lifetime.

Part 4 of Yaatra 2015 will hold a surprise but I’m not telling right now!