Quite a few readers felt Yaatra 2015 - Part 1 was like a trailer and have been eagerly inquiring about when the next part is coming. This has inspired me to post this at the earliest and I hope you enjoy reading it just as much as Part 1.

Our activities on day 2 began a little later than scheduled but surprisingly, not as late as I had feared. By 9.45 am, we were off in an Eco taxi with a friendly driver who was quite willing to answer queries with detailed information. When he realized we are from Bangalore, he shared with us his expert opinion of our hometown… garnered from spending two months there….first, that it has great weather and second, that Bangaloreans are very simple and so, they feel people from Delhi are clever (read as street smart). The first part is the unqualified truth…about the latter, I’m not so sure, but I just couldn’t bring myself to spoil his naïve fantasy. 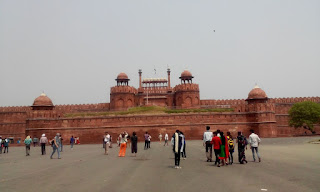 We began the day with prayers to Lord Narasimha at the Ahobila Matham at Karol Bagh. Undaunted by the midday heat and fortifying ourselves with some cold lassi, we then walked around the historic Red Fort, trying to imagine what it must have been like to live in such royal grandeur. The place was filled with tourists and yet, there was that typical Indian bonhomie that allows complete strangers to strike up an uninhibited conversation. In an interaction that was hard to ignore, we witnessed two women, who until then were strangers to each other, exchanging notes about where they purchased their outfits.  And they even promised to help each other out in doing the same when they visited the other’s place.

Deciding to ride in a cycle rickshaw from the Red Fort entrance to the parking lot was quite agonizing for me. On the one hand, it seemed inhuman to make someone undertake such difficult physical labor. On the other, refusing to hire the vehicle also meant depriving him of a small sum of money that was significant to him. And even as I felt sad to think that such a mode of transport still exists in our country, I also felt a sense of being moved by the cycle rickshaw driver’s willingness to thus struggle to eke out an honest living. 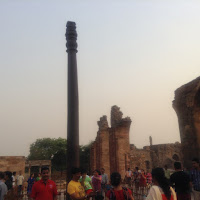 Post-lunch we paid respects to our martyrs at India Gate, had an outside view of the power corridors of Parliament and admired the architectural beauty of Rashtrapati Bhavan. Last on the day’s itinerary was the Qutub Minar with its rustless iron pillar. I am not attempting a description of these places for what could I add to what you already know from history lessons, guidebooks or Google?

You may wonder why other important places in Delhi…Humayun’s tomb, Lotus temple, Akshardham, Raj Ghat etc etc don’t figure here…and what of shopping at Connaught Place? I’d like to clarify. Teachers may have long vacations, but an entrepreneur can take only so many days off from his fledgling business…and when time is a constraint, prioritizing can be amazingly simple..

All in all, visiting these places served to reinforce my impression of Delhi being a place of grandeur, majesty and power as perceived during the previous night’s drive from the airport. But I’m tempted to believe this aura is not just the result of the historically important places and the well-planned layout of those parts of the city. In my opinion, it is also a result of the fact that being the capital city, this place is the heart of the country’s political arena and that lends the unique feeling of entitlement…a kind of action-oriented raajasik vibe.

The only sour note during this day for me was struck by the self and selfie – obsessed youth everywhere we went. The history, the beauty and the magnificence of these places was totally lost on these tourists – it seemed like they were there solely to click photographs of themselves and their friends and share it on Facebook, Twitter and Whatsapp.

I find it infinitely depressing to think that our youngsters are so consumed by this kind of social media frenzy that they are losing the ability to experience the here and now and find joy in it. Even today, if I close my eyes and think of the Red Fort or India Gate, I can picture the dignity it exudes and feel an upsurge of patriotism. I can’t help but wonder what such an exercise will conjure up for the selfie-obsessed young men and women….a remembrance of how many likes their picture got? Or the comments about their looks or their dress or hairstyle? Or their companion in the picture?

But I guess everything has its pros and cons. Perhaps Aamir Khan had better focus on Snapdeal ads rather than the Atulya Bharat ones! Because, now that our youth are so busy with their smartphones, maybe our monuments are finally safe from being defaced by etchings that profess undying passion to an ephemeral sweetheart.
Posted by Anu at 11:27