It's 8.10 am as I pick up Amma en route to the temple she's identified for the Thai Velli Naagar poojai. This is a particular form of worship offered to the Snake form of the Lord during the Tamizh month of Thai. In the midst of a concrete jungle like Bengaluru, you don't find live snakes living in anthills; so a temple that houses a tree under which snakes had traditionally lived, will generally have Naaga vigrahaas (idols) made of stone, placed under the tree in a separate area to allow people to offer worship.

I've brought nothing but flowers; the rest all she's taken care of herself because she doesn't want to burden me as I have to rush to college after the poojai.

We enter the temple and make our way to where the Naagar vigrahaas are installed. It’s a little dark in that area and so, I go to request that the lights be switched on. Amma performs the initial purification of the area around the idols by sprinkling water and drawing a tiny rangoli with the white powder taken out of a zip-lock cover.

Reciting the Mahalakshmi Ashthakam, she anoints the vigrahaas with kumkum and asks me to follow suit. Next, we offer flowers and place a thamboolam (betel leaves, betel nuts, a packet of kumkum-manjal, 2 dried rhizomes of turmeric and 2 banana fruits). We pour the milk little by little over the hood of the Naagar that has been etched into the tree below which the vigrahaas are placed.

Then, we offer an aarati, praying for the well-being of everyone. I know with certainty that Amma must be saying a few extra prayers asking that her grandson (my son) be blessed with good health.

A lady devotee passing by stands awhile to let us complete the ritual. Then, she offers to the deities the flowers she has brought and looks towards the aarati lamp we’ve placed aside where the camphor still burns bright. I assume she’s wondering if she can also do the aarati, and nod at her to go ahead – after all, aren’t we all bound by the same devotion? And when all belongs to Him, where is the bheda (difference) of “our” aarati and “her” aarati?

As she finishes her worship, I ask her to wait to receive a thamboolam. Amma makes me give it to her and the woman, who I’m sure is older to me, accepts it and suddenly dives to do namaskaar. I hastily step back, trying to tell the lady to do namaskaar to Amma because she’s older, but she persists.

I look askance at Amma and she quietly nods, as if to say, “It’s ok. Don’t interrupt her.” I’m reminded of what Dr Balasubramaniam said during the Vivekananda Jayanthi a few days ago about how strongly rejecting something is also a manifestation of ego; the truly ego-less are those who are able to stay equanimous even when they receive recognition, calm with the realization that they are but a medium for that to pass to the Divine One who is their rightful recipient.

Having completed the poojai, we do a pradakshinaa and get ready to leave. Amma gives me a little of the left-over milk to be taken home consumed as prasaadam. “Kulanthaikki kudu” (give it to the child), she repeats so that I don’t forget to ensure the prasaadam reaches the no-longer-child-but-wannabe-grown-up-teenager.

As we move away, I feel like taking a picture as a reminder of the hallowed feeling that has enveloped me during these few minutes. 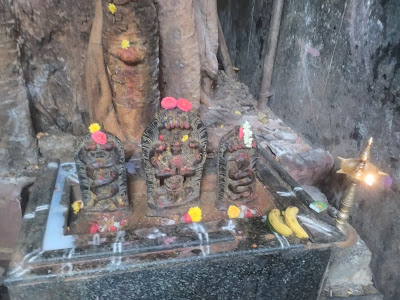 I’m not given to too much of ritualistic worship, but don’t shy away from it when it has to be done, either. Perhaps the regular practice of chanting the Lord’s Name at all times has been purifying my mind, stripping away from it the need to question the need for rituals, choosing, instead, to see in them yet another way to experience the same spiritual emotion and exalted feeling that comes from the chanting.

Poojai completed, we move out of the temple. I hail a passing auto, we get into it, and manage to confuse the driver with our instructions. I say, “Please go to the left” because I want to drop her to the entrance of the apartment. She tells him, “No, stop here and let me get down, then you go right. I can walk home” because again, that concern about not delaying me for work.

While I do benefit from the concern she has, born out of herself having pursued a successful career for close to 30-odd years, I have learned now to overrule her on such occasions, and get my way, because the busy roads of Bengaluru city are an equal-opportunity tormenter with no discrimination between old and young.

I reach home, get busy putting together breakfast and tiffin box for myself and the “Kulanthai.” No lunch to be prepared because – yet again – Amma has been the savior, suggesting she will prepare lunch for her kulanthai so that I – yet again – don’t have to overstress.

Like innumerable times before, I pause for a few seconds, saying a heartfelt thanks to God. I wonder if I’ve already done a lot of Thai Velli poojais in some past janmaa. After all, not every woman is fortunate enough to be blessed with such a caring Amma in the form of her husband’s mother !!
Posted by Anu at 12:56