There’s something about tumblers that gets to me.

Now, I’m not talking of the people who use the microblogging and social networking site called Tumblr – and I don’t think they are called tumblers, anyway. Nor am I speaking of the sportspersons who participate in a specific form of gymnastics called Tumbling. My post has nothing to do with locks or a particular breed of pigeon either. This preamble is, of course, just to show how thoroughly I research any term before using it.

When I say tumbler, I’m talking of the humble steel glass that has (until recently, maybe) been the staple container used to dispense water, milk, tea or coffee in most Indian homes (at least definitely in those located south of the Vindhyas). Of course, thanks to liberalization and globalization, these same homes are nowadays equally likely to sport a variety of glass and porcelain containers that are deemed more befitting of one’s social status than the lowly tumbler.

Coming back to the thrust of this post, there’s something about tumblers that gets to me. Especially the sight of unwashed ones strewn around by people who can’t be bothered enough to rinse them out.

This tryst probably began at the time of the wedding of one of my sisters. It was held in our native village which, while rich in ritualistic knowhow, was quite backward when it came to resources. Besides, the now ubiquitous plastic glasses had not made an appearance 24 years ago.

As anyone of the TamBrahm community will tell you, in those times, the wedding grandeur ratings were more often than not decided by the quality (and quantity) of the coffee provided by the bride’s family. A steady supply of the concoction through all times of the day (and night) was the grease that helped the wedding juggernaut roll smoothly until the bride was safely ensconced in her marital home.

During my sister’s wedding, there was no dearth of coffee. But the meager stock of tumblers couldn’t quite keep up with the beverage’s demand. I had just finished my 12th standard exams – which means I wasn’t young enough to be told “go and play outside.” At the same time, I wasn’t old enough to be called upon to assist with getting things ready for the more important rituals.

I don’t remember anyone specifically telling me to do it, but I took upon myself the mantle of “tumbler-washer.” For the three days of the event, I found myself constantly shuttling between the washing area and the hall where the rituals were being held, unwashed coffee tumblers in hand, on a self-appointed mission, playing a vital role in the coffee supply chain.

My labor did not go unnoticed. In hindsight, considering the nature of the attention it garnered, I’d have been quite happy to have been ignored. An elderly person sought me out, commending me on how I was working hard to help in my sister’s wedding. He said he was very impressed with me, and had made up his mind to ask my dad for my hand in marriage for his grandson. To say I was stunned would be an understatement. But I clearly remember that even in that befuddled state, I wondered how such an important decision could be made on the basis of something as frivolous as tumbler-washing!

Of course, today, when each day brings its quota of tumbler-washing my way, I know there’s nothing frivolous about the task, although the process has certainly become a routine one. And yet, there are times when this simple activity can take my mind on an insightful journey.

A few months ago, I had been away from home for a day. When I returned, this was the sight that greeted my eyes. Look carefully at this picture. 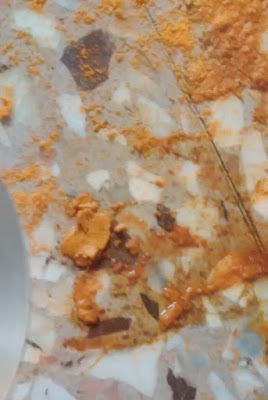 Turmeric spilled on the floor, slightly wet in some parts. The turmeric had been sprinkled to drive away ants that had been crawling on the floor. But that was just part of the scene. This image below was the entire scene. 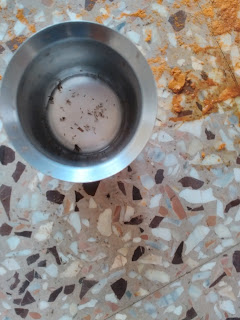 The ants originated from the few drops of leftover coffee in the tumbler. They had covered the entire tumbler and spilled out across the floor. I agree that using turmeric is an excellent non-violent home remedy to get rid of ants. But to me, it seems a more sensible, lasting solution would have been to remove the tumbler and wash it.

Even as I set about cleaning the tumbler, I was struck by an epiphany – how often in life we seek to focus our attention on the effects of an issue – throwing turmeric over the ants on the floor – while willfully ignoring the source from where it arises – the dirty tumbler – because tackling the latter requires more effort.

If only we could get ourselves to deal with the root cause of any problem, perhaps we could avoid the emotional roller coaster rides that are such a drain on our energy?