It's been two months since I last ventured here. A hectic, tiring two months that left me with no energy and inclination to write or engage on any social media platforms. That is, except for two occasions, when I was forced to submit my story in the short story writing challenge for which I signed up in February of this year. Now, things have started slowing down, and there's a much awaited vacation looming on the horizon; so, hopefully, I will be writing more often 😅

About seven people reached out to me during this hiatus, asking if all was well, because they noticed I was off the radar. Thank you, guys and gals for your loving concern, for I suspect it acted as a positive reinforcer in hastening my return here.

This post is a 500-word short story I wrote for this month on the prompt "Going Home." I've taken a little liberty with what is essentially a real-life story.


Title: Home Is Where the Heart Is


After stumbling for two hours through the dense undergrowth, Captain Kiran finally accepted that he was well and truly lost on his first day in the beautiful mountains of Arunachal Pradesh. He rued his impulsive decision to trek to the army camp instead of waiting for the jeep that was to transport him.

“Veerta aur Vivek,” he chanted aloud, trying to draw strength from the motto of his alma mater, the Indian Military Academy. He knew he had shown no ‘vivek’ or wisdom and was in dire need of ‘veerta’ or courage, to go on.

A low, bloodcurdling growl came from somewhere to his right and Kiran ran blindly, mindless of the low-hanging branches that scratched his face and arms. Which is why he didn’t notice the hand that thrust into his solar plexus, pushing him to the ground. The same hand steadied him into a crouching position and a voice barked, “Take a few deep breaths and you’ll be okay.”

Looking up, Kiran noticed an elderly but fit man in front of him, dressed in old army fatigues, with a rifle slung across his shoulder. Answering Kiran’s unasked question, the guy separated the branches of the trees right in front and beckoned Kiran to take a look.

“Sorry for hurting you, but I had to stop you before you went there, you know.”

Kiran looked out gingerly to see a bottomless ravine that plunged a few thousand feet.

“Indeed. Now that we’re not at war with China, this is the only service I can render my country,” he grinned. “Come, let me show you the way back to your camp.”

“How do you know where I’m going?”

“I heard you pleading for ‘Valour and Wisdom,’ young man, and knew you’re an alumnus of the IMA at Dehradun.”

Kiran struggled to keep up with the rifleman’s scorching pace and within the next hour, he found himself in the army camp. But his guide was nowhere to be seen. Kiran asked the guard at the gate if he’d seen a man with a rifle passing by. The guard looked closely at him and mouthed a cryptic reply, “He’s gone back to his home.”

Later that evening, as he walked on the Sela Pass, Kiran came to a stop outside a structure that bore the name of “Jaswant Garh.” 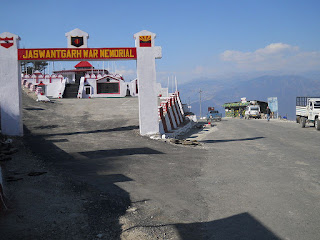 Entering, he found a cabinet display of the personal belongings of Rifleman Jaswant Singh Rawat who was killed on 17th November, 1962, while fighting a large Chinese force with a mere three hand grenades in his pocket. A war citation gave a brief description of the encounter and explained that for his valiant act, the rifleman had been posthumously awarded the gallantry award called Maha Vir Chakra.

As he gaped at the photograph that took centre stage in the hallowed room, Kiran could have sworn his guide of the morning actually smiled and winked at him.

My intent is to inspire you readers to look up the details of the incident it mentions and so, I've provided a link to another blog that does justice to the legend. Read this.
Posted by Anu at 15:44