Born and brought up in Karnataka, Amma knew to read, write and speak Kannada. She also spoke the peculiar dialect spoken by Iyengars of the “Ashtagrama” region of Hassan. After moving to Redi and then Goa, Amma learned to speak Marathi, Konkani and Hindi. She even picked up basic English and occasionally used a few surprisingly apt words. By association with the bhajan group, she learned to speak pure Tamil too.

One of our favourite foods, out of all the tasty things Amma cooked, was “Fodi.” It’s a Goan dish – basically fritters – that she made with potato and sometimes, also with ‘neer phanas’ which I think is breadfruit (it looks like a miniature version of the jackfruit). Another Goan dish that Amma excelled at making was solkadi – the kokum drink.

In all the houses in Goa where there was open space around, Amma had cultivated flowers and ornamental plants and maintained a small garden. We used to have large yields of the Gotla flower (Barleria lawii) in pink, light purple, and white colors, and Amma would string them up for us to wear in the hair. 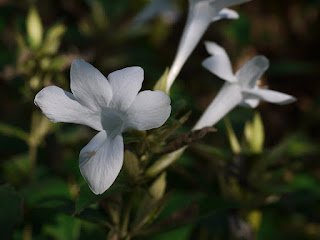 I’ve already mentioned how she used to make paper flowers, and flower garlands and godadis (quilts from old cloth), and how she stitched our clothes herself. She also did quite a bit of hand embroidery – different types of stitches, and cross-stitch too. She would stitch a backing cloth to the embroidered cloth and voila – the pillow covers were ready! These are all skills she picked up in Goa.

During the bhajan sessions, Amma learned several bhajans. On her own at home, she learned many new stotrams and also taught them to us. After moving to Mysore, at age 57, Amma learned to recite the Soundarya Lahari hymn composed by Adi Shankaracharya, which runs into 100 verses, with each verse having a different tune.

I mentioned how Amma and Appa learned the 4000 Divyaprabandham in Bangalore. Although older than 60 at that time, she was a very zealous student and would practice diligently at home, reciting every evening what the teacher had taught in the morning.

Amma even knew what to do when the power supply had stopped in just our house. She would switch off the mains, pull out the fuse, and check if the wire there was burned, and repair it if needed. She would fish a metallic wire out of an electrical kit she had handy, which was filled with old wires, screwdrivers, cutting pliers, and other paraphernalia. She taught me too how to change the fuse.

And then there were the tricks Amma developed.

Look at this cloth pouch enclosing the table leg. It was stitched by Amma when she couldn’t find the rubber bush to replace the one that broke. Not wanting to let the metal scratch the floor, she devised this ‘cloth bush’ herself! 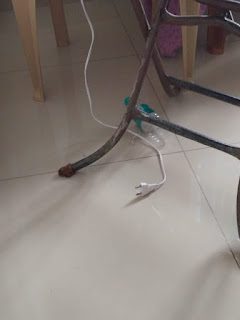 Long before the steel wire scrubbers were available in the market, Amma had her own way to remove stubborn sticky items from utensils. She would just scratch at it with empty blister packs she had saved after using up the tablets in them.
Look at this picture. 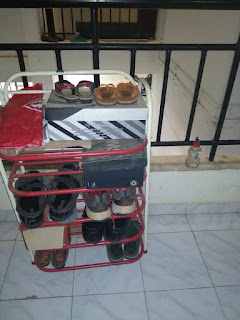 Did you notice the plastic bottle next to the shoe stand? It was the hand-wash devised by Amma. She filled an old Pril bottle with water, and kept it next to the shoe stand. Because after touching the shoes, you must wash your hands, but you can’t walk into the house with the shoes on to do the washing. So, simply squirt a few drops of water onto your palms for a quick clean. Komala’s husband Srivathsan liked the idea so much that he’s following Amma’s tip!

Coming from the days of cooking by a wood fire on a mud stove, Amma made a smooth transition to the gas stove and much later, even to the gas hob. From washing clothes by hand, she moved to the washing machine. From grinding in a stone, she waltzed into using the mixer and grinder. From filtering coffee decoction through a cloth, she went to using a coffee maker. From boiling water in a copper hande on firewood, she moved to boiler, geyser, and even gas geyser. Cherishing her traditions, yet adapting to the new, that was the spirit of Amma!