(Credit for today's post idea: My sister Komala)
India celebrates 23rd December as Kisan Divas or National Farmer’s Day. Why this particular date? Because it is the birth anniversary of India’s 5th Prime Minister Choudhary Charan Singh, who brought about legislation for the betterment of farmers.

So today’s story is of a farmer called Savata Mali who was born in the year 1250 in a village called Aranbhendi in Solapur of Maharashtra. From a young age, Savata would be engrossed in singing the glories of Lord Vitthal even as he went about his duties on the farm, seeing God in nature.

Being busy the year round, he never went on the annual piligrimage called “Vari” that all people undertake to Pandharpur. However, he would extend hospitality to all the pilgrims who passed through his village, serving them with food and vegetables grown in his field. 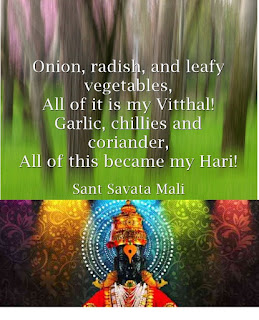 As Savata’s devotion increased, people flocked to his field to listen to his bhajans. When anyone expressed their inability to go to Pandharpur, and felt despondent, Savata would console them saying, “What is the need to go so far and worship Vithoba? Learn to see Him in your field and house; you will get His blessings here itself!”

This irked the Brahmins of that area, who found that people no longer came to their discourses. So they hatched a plot. They secretly buried a figurine of a deity in Savata’s farm. Savata found it while ploughing his field and then, the crooks insisted a temple must be built in that very spot, right in the middle of Savata’s fields. Savata, who saw his fields as the property of Vitthal, and himself as a mere keeper of Vitthal’s property, did not agree to this; so the crooks got him beaten up, and destroyed the crops and vegetable plants growing in his fields. Ruing this, Savata told his wife, “I’m not upset that they beat me up; I’m worried that they destroyed Vitthal’s crops!”

A few days later, one of the Brahmin’s son’s fell seriously ill and was at death’s door. Hearing this, Savata rushed there with some herbs grown in his fields, prepared a medicine from them, and on consuming it, the boy recovered. That Brahmin fell at Savata’s feet, begging forgiveness for having tortured him; all Savata did was to console him, saying everything happens only as per Vitthal’s wish!

The renowned saints Namdev and Dnyaneshwar were Savata Mali’s contemporaries and it was said that Vitthal was always with them. One day, when Savata was in his fields, engrossed in bhajan, he suddenly felt the area enveloped by the fragrance of Tulasi. The next moment, he saw Lord Vitthal standing right in front of his very eyes! As Savata fell at his Lord’s feet and wept tears of joy, Vitthal lifted him up, and asked, “Namdev and Dnyaneshwar are searching for me everywhere. Please give me a place to hide in your fields, Savata.”

What could Savata do? He asked the Lord, “Vitthala, you are the all-pervading Lord of the Universe! How can I hide YOU somewhere? Can one hold the sky in one’s fist? Or the ocean inside a pot?” But the Lord wouldn’t take no for an answer. Finally, Savata found a way out – he seized a sickle lying nearby, ripped apart his chest, and asked the Lord to hide inside his heart!

A little while later, the two famed saints came there, and asked Savata if he had seen Vitthal passing that way. Truthfully, Savata replied that he had seen Vitthal in his heart and nowhere else. One of the saints commented sarcastically, “Yes, that’s right! You’ve never gone even once to Pandharpur, how will you know Him?” The next moment, Vitthal emerged from the heart of Savata, and gave the two saints His darshan, saying, “One does not need to come to Pandharpur to see me. Like Savata, those who worship me with pure devotion in their hearts, and see me in everything, I will always live in their hearts!”

Before every meal, can we remember our farmers with gratitude for all the hard work they do to ensure we get food to eat?

Can we make sure we don’t ever waste food?

Like Savata Mali, can we learn to see the Lord in the work we do every day?

Can we give up the sense of ownership, and see everything as the Lord’s property and ourselves as mere caretakers?

Even if we cannot go to temples or on pilgrimages, can we bow mentally at the Lord’s feet wherever we may be?