Margazhi Blogotsavam: Day 23: Chastened by a Devadasi To Turn Towards God: Bilvamangala

During the 12th century, a brahmin called Bilvamangala (also called Vilvamangalam) lived in Kerala. He was extremely attached to a devadasi called Chintamani and wanted to spend all his time with her. So much so that even after his father’s death, when the priest was still performing the rites, Bilvamangala asked him to hurry up, because he wanted to go to Chintamani.

As Bilvamangala set out, a storm began to rage. It was raining heavily; nothing could be seen; the river was flooded and there was no boat to take him across. Blind with longing, Bilvamangala caught hold of what looked like a wooden log floating on the river. Somehow he managed to cross the river.
Bilvamangala walked through the pouring rain and when he finally reached Chintamani’s house, it was locked up, because she probably didn’t expect anyone to come there in such inclement weather.

Not to be deterred, Bilvamangala made his way into the garden. He saw a rope hanging down from the balcony outside Chintamani’s room. He climbed up using the rope for support and knocked on the balcony door.

Chintamani opened the door and was stunned to see Bilvamangala. “How did you come in such bad weather?” she asked. He narrated all his travails and concluded by saying, “I just cannot stay without you!”
Looking at the rope by which he had climbed up, Chintamani noticed it was a serpent, and not a rope. Disgusted beyond words, she blurted, “Oh, you foolish man! You are so attached to this body of mine which is made of mere flesh and bone! If you had even a fraction of this attraction for Sri Krishna, you would have become a saint by now!”

Bilvamangala was shocked out of his senses by the truth in Chintamani’s words. Immediately, he turned around, and went back to the river. With his new eyes, when he looked at the log of wood he had used to cross the river, he saw that it was actually a floating corpse! Ashamed of himself for falling to such depths, he decided to go to Vrindavan to seek Sri Krishna.

Giving up one’s basic tendencies isn’t very easy, though. As Bilvamangala walked, he saw a beautiful woman and kept following her till she reached her house. When her husband questioned him, Bilvamangala said he wanted to embrace that lady. That man ordered his wife to agree. As she moved towards him, Bilvamangala was jarred out of his senses again. Asking for the woman’s hairpin, he took it and saying, “These eyes, they are my enemy,” he pushed the hairpin into his own eyes, blinding himself forever.

When his external eyes went blind, Bilvamangala’s inner eyes opened up. He reached Vrindavan, and got was initiated into Krishna bhakti by a Guru called Somagiri. With a single-minded focus, Bilvamangala worshipped Sri Krishna; so pleased was the Lord with him, that He would come in the form of a child, sit next to Bilvamangala, listen to the songs he composed, and it is said, even lead the blind Bilvamangala across the town!

Bilvamangala is renowned for his composition called Sri Krishna Karnamrutham. In the introduction to this work, he pays obeisance to not just Guru Somagiri, but also to his first Guru who actually opened his eyes – Chintamani!

The story of Bilvamangala is told in different parts of the country – Kerala, Andhra Pradesh and West Bengal, with each one claiming him as their own.

Can we stay alert to the wisdom/lesson that lies in the criticism that comes our way, from whichever source?

Can we learn to go figuratively blind – that is, adopt methods that help us turn a blind eye to these distractions which lure us away from the path towards God? 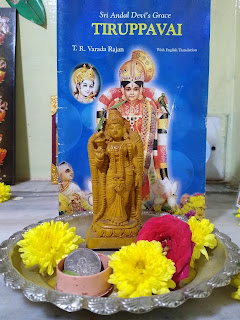