Margazhi Blogotsavam: Day 20: Whom the Lord Turned to See: Kanakadasa

Biregowda and Bachamma lived in Baada village of Dharwad, Karnataka. After going on a pilgrimage to Tirupati, they were blessed with a son, whom they named Timma in honour of Lord Thimappa (a colloquial name for Sri Venkateshwara of Tirupati).

When Timma was a young child, he lost both his parents. However, thanks to his pious parents, he had implicit faith in Keshava (another name for Sri Krishna) and grew up into a courageous yet compassionate and devoted young man who took on his father’s role of village chief.

One day, while digging in the backyard of his house, Timma found a huge cache of gold; after that, everyone began calling him Kanaka – which means gold. Kanaka used the wealth for construction of a magnificent temple to Keshava in the village of Kaginele.

A few days later, Kanaka’s village was attacked by the neighbouring village and in the battle, Kanaka was sorely wounded. As he lay on the battlefield, losing the last of his energy he begged for Keshava's help. How could the Lord refuse? Kanaka had a vision of Keshava and felt rejuvenated. Moved by this experience, Kanaka decided to give up worldly life, and devoted himself to serving the Lord.

On the advice of Saint Tatacharya, Kanaka became a “Dasa” – literally, servant of God, and began moving from village to village, singing praises of his Keshava, exhorting people to pray to Him.

One day, Kanaka passed by a brahmin engrossed in meditation and was moved by the serenity on the man’s face. He too wanted to learn to meditate, and the brahmin sent him to Saint Vyasateertha. The saint was busy in discussion with the villagers who were constructing a tank; a huge boulder blocked the site, and no one was able to move it.

When Kanakadasa reached there and introduced himself, asking for a mantra to meditate, the amused saint laughed, “What could someone like you meditate upon, except perhaps, the mantra of ‘buffalo’?”

Innocent Kanaka accepted that mantra and sitting next to the boulder, began repeating the mantra, “Buffalo, Buffalo, Buffalo!” Everyone gathered around him and were having a hearty laugh, when suddenly, there appeared a huge buffalo! Now everyone ran away, scared of “Yama’s vehicle”!

Kanakadasa turned to Saint Vyasateertha and on his advice, requested the buffalo to move the obstructing boulder away. The tank construction could now proceed, thanks to Kanaka’s mantra!

One day a dog strayed into Kanaka’s house, and picked up a roti. On seeing Kanaka, it was frightened; it dropped the roti, and ran away. Kanaka ran behind it, to feed it the roti!

When people asked why he was chasing the dog, he said between tears, “God came to my house and went away without eating!” This became a joke in the village, but Saint Vyasateertha was now convinced that Kanaka was a true devotee who could see God in everyone.

The other disciples of the saint couldn’t bear Kanaka being the Guru’s favourite. The Guru decided to open their eyes. He gave everyone a banana, and told them to eat it only in a place where no one could see them. One disciple climbed up a tree in the forest; another hid in a haystack; yet another went to an empty field. When everyone returned, Kanaka still had the uneaten banana in his hand. The Guru asked why. Pat came Kanaka’s reply, “Wherever I hide, how can I stay hidden from God’s eyes? He is everywhere! That’s why I couldn’t eat the banana!”

During the course of his travels, Kanakadasa met some pilgrims who sang the praises of Sri Krishna at Udupi. Moved by the desire to see the Lord, Kanaka went along with them. But at the temple gates, he was turned away, because he was of ‘low’ caste.

Heartbroken and dejected, Kanaka went and stood behind the temple. Crying tears of devotion, he begged, “Krishna, can’t You hear my call? Let me see You, dear Lord! Open the door, Krishna!”

Inside the sanctum sanctorum of the temple where Sri Krishna was being worshipped, a mysterious thing was noticed. The murti of Krishna turned, to face the back of the temple! A portion of the back wall broke and Krishna was giving  darshan to His beloved devotee Kanaka!! When the devotee wasn’t allowed to come to God, He Himself went to the devotee!

Till today, visitors to Udupi Krishna temple consider it a blessing to have darshan of the Lord through “Kanakana kindi” – Kanaka’s window.

Kanakadasa is one of the stars of Carnatic music and wrote about 240 musical compositions that continue to inspire people till this day. Out of his 5 major works, one, called Ramadhanyacharithre is remembered to this day for its allegorical references to class struggles. 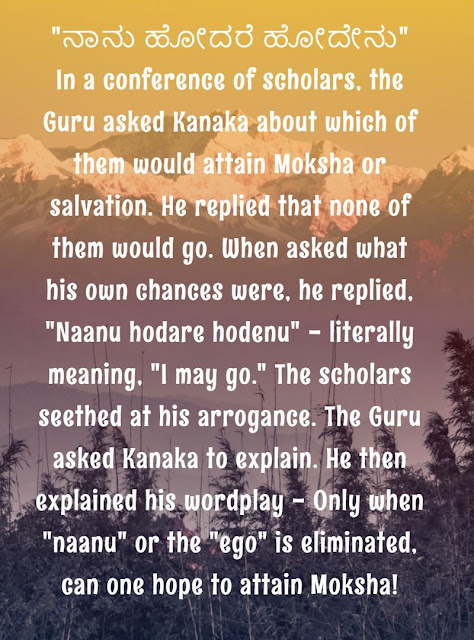 Like Kanaka, can we learn to truly see God in everyone, and behave accordingly?

As he taught, can we make efforts to give up our ego and thus, grow into better human beings?