This month's prompt for the short story writing challenge was "Cut the strings." I thought and thought of different ideas (involving strings) to weave into a story - a veena vidwan, or a young adult cutting free from the apron strings of his mother, or a tennis player, or even an athlete suffering a hamstring injury! Somehow, nothing seemed quite right and waiting for the muse to show up, time sped by and suddenly, today, the 4th of October was the day to submit the story that I hadn't yet written.

An expectant hush settled over the crowd as Shivu Bhat walked into the temple. The minute he threw open the doors to the sanctum sanctorum, the temple bells pealed and the ceremonial drums struck up the traditional beat. After hours of waiting, hundreds of thirsty eyes feasted on the divine sight of the Goddess Renukamba. 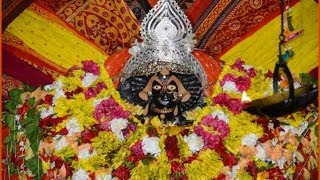 Decked in a bright red sari, adorned with ornaments of gold and precious stones, covered with layers of garlands of yellow and orange marigold flowers, She waited patiently to receive the worship, and fulfill the prayers of Her devotees.

Shivu, the young temple priest, got busy reciting the mantras and swinging the lamps as he performed the rituals. The devotees watched silently, muttering their own prayers and mentally beseeching the goddess to grant this or that wish.

Finally, it was time for the special rite that drew people from villages far and near. Question Hour with the Goddess. Anyone who wanted Renukamba’s guidance stood in front of Her and mentally asked if a particular course of action should be undertaken or not. It was believed that She would answer by causing one of the garlands draped across the idol, to fall. Her wish would cut the strings holding the garland, causing it to fall. If the garland dropped down on the left side, the answer was taken as a “no” and if it fell on the right, the answer was considered a “yes.”

Shivu had been performing this particular rite since the past few years as part of his priestly duties, although he didn’t really have a strong belief in it. An educated young man, he had initially been dubious, arguing with the senior priest saying, “How do you know it’s Renukamba speaking? If the garland had not been secured firmly on one side, it’s bound to fall from there. Or maybe the string is weak at one point and that’s where it snaps. ”

The senior priest had refused to be drawn into the argument, merely saying, “I don’t know all these things, Shivu. It’s the faith of the people, and Renukamba responds. So far, I have never heard anyone complaining that Her decision brought them trouble.”

After the senior priest had quit, the rite had become part of Shivu’s duties and he went about it like any other part of the worship. Today though, he was a little apprehensive. The young Aaryaa was going to be participating, wanting to know if she should take up the job offer she had received at an office in the nearby town. Over the past few months, Shivu and Aaryaa had grown into good friends and given time, the relationship was likely to flower into something deeper.

Shivu had already told Aaryaa that she should take the offer. But Aaryaa was not so sure, and wanted to ask Renukamba. It hurt Shivu to think that an otherwise intelligent girl would trust the supernatural over an educated human’s opinion. He’d tossed and turned in bed the previous night, hoping the answer would turn out to be a yes for Aaryaa’s sake, stubbornly ignoring the sadness that gripped him to think of life in her absence. How he wished he could hold her in his arms and transmit his confidence to her, and calm her fears!

Now, standing in front of Renukamba, scanning the crowd to locate Aaryaa, Shivu sighed. Momentarily distracted from his priestly duties, he wished he could gather up the courage to ask her how she felt about him.

By late evening, the festivities were over and the crowds were gone. Aaryaa hadn’t turned up to ask her question. Shivu was alone in the temple, putting things in order and clearing up. He looked towards Renukamba, and the few garlands that still hung across Her, and She seemed to be smiling at him.

On an impulse, Shivu went and stood in front of Renukamba, closed his eyes, put his palms together in prayer, and said, “Ma Renukamba, I have served you diligently and think of you as my Mother. You know what my feelings are about this question-and-answer thing. But now, I really don’t know what to do and am asking for Your help. Should I tell Aaryaa about how much I love her and how I want to spend the rest of my life with her?”

“Oh, Mr. Temple Priest, asking our own private questions to Ma Renukamba, are we?” A sweet voice, followed by a mocking laugh, broke into his reverie.

Shivu turned to find Aaryaa smiling playfully. Blushing, he averted his eyes and moved away, wondering when she had entered.

“Why didn’t you come for your answer?” he asked.

“I thought about your advice and decided you were right. There’s no harm in giving the job a try.”

As Aaryaa continued looking at Renukamba, there was a sudden movement. With awe in her voice, she said, “A garland just fell on the right side. Whatever the question you just asked, the answer is a yes. Or wait…was that an answer to my saying I will take the job?”

Shivu stood transfixed. For a while, he didn’t know what to say or do. Then, slowly, he turned and walked to stand in front of Aaryaa. Looking deep into her eyes, he said, “There’s something I want to tell you….”

“But….how could you know what it is? I haven’t said anything yet…”

“You were asking your question loudly to Renukamba, Mr. Temple Priest! That’s how I know.”

“Oh, Renukamba…. ….Aaryaa, are you sure? Do you really feel that way? And …and…what about your job? And...your parents…what will they say?”

“Don’t you think you’re burdening Renukamba with too many questions?” Aaryaa teased.

Had anyone looked into the sanctum sanctorum then, it would have seemed like Renukamba was smiling with the satisfaction of a mother who’s found the perfect match for her child……