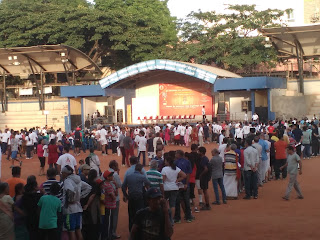 The early morning sunlight filters in through the trees. Occasional shouts from kids practicing at their basketball coaching session break the silence. There is an increasing hum of voices as the crowd swells in size. Some people have lined up in a queue that is snaking its way to the tables set up near the stage. Others are standing in small groups, interspersed all over the playground, talking of this and that. 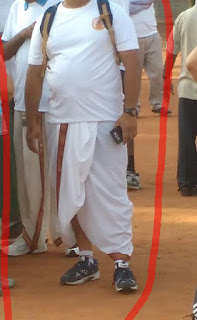 It is 6.30 am and already, several hundreds of people have gathered at the Malleswaram playground opposite K. C. General Hospital. Surprisingly, there are as many elderly folks as there are youngsters; and a sizeable proportion of the crowd is in gear that is not conventionally considered suitable for the purpose of the event. There are even two guys sporting a bizarre look, drawing more than a fair share of stares that later, turn into smiles of awestruck approval.

There is the usual enthusiastic set of young athletes, looking for the challenge of a run. There are formal-looking representatives from the Athletic Association who tell me they are there to flag off the run. To me, it seems like they look a little bewildered at the motley crowd gathered there, unlike anything they’ve seen before. The fact that someone like me – who has no history of participating in a walk/run before – is there at the venue, is proof of the motivation that has driven most people there – devotion rather than physical prowess.

The occasion: Sri Ramanuja 5K Run 2016 on the theme of “Rush towards Ramanuja,” organized as part of the Ramanuja Millennium 2017 celebrations. 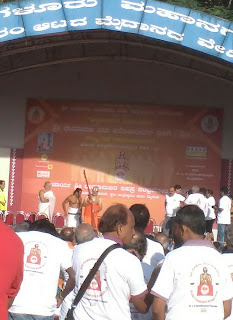 Participants have been asked to gather at the venue by 6.30 am; but the event only starts by 7.45 am and yet, there is no dampening of the spirits. There is a small inaugural lighting of the lamp, the customary address by the local MLA supporting the event and the asheervachanam by H.H. Sri Sri Sri Yadugiri Yathiraja Narayana Ramanuja Jeeyar Swami of the Sri Yadugiri Yathiraja Mutt, Bangalore. Jeeeyar Swami says that this event was conceptualized as a walk, but looking at the enthusiastic participation, he is feeling like running. 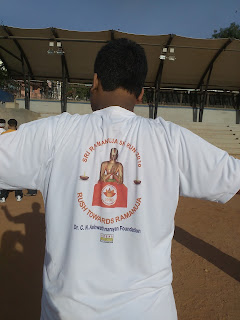 True to his words, once the run is flagged off, Jeeyar Swami sets a rapid pace for the crowd to follow. The marathoners then get into their stride and take off, leaving the rest of us to walk briskly along the right side of the road, chanting slogans of “Namma Nade, Raamanujaredege” and “Rush towards Ramanuja.”

We try not to affect the early morning traffic along Sampige Road. The trees provide a welcome shade as we walk. With the monsoon just around the corner, Bangalore has returned to her glorious weather and there’s a strong, cold breeze blowing that makes it an invigorating walk.

A bus driver slows down to ask what the run is about. A lady selling flowers on the pavement hurriedly stands up with folded hands and a prayerful look and bows to Jeeyar Swami from afar. There’s a couple who’ve come with their baby in a pram, and someone advises them to keep away from the centre of the road. A volunteer in a T-shirt with “Civil Defence” written on it, keeps people in line, making sure they don’t obstruct the flow of traffic.

The run is to pass down 16th Cross, to the TTD temple in Vyalikaval, to Sankey Tank, then Margosa Road and finally get back to the Malleswaram Ground where it all started.

I break off at the 16th Cross to head back home partly because I’m not sure if I can endure a 5 km walk in place of my usual 2 km one. Besides, samsaara and the duties of a gruhastha beckon. I bow silently to the mental image of Ramanujacharya and walk away from the devout gathering. 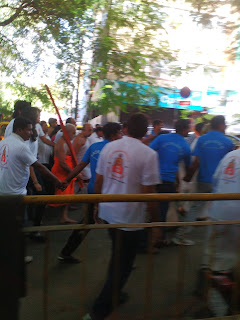 The image that sticks with me for long after is the sight of the Jeeyar Swami walking barefoot, with an agility that belies his age, with a steady benevolent glance that shows a spark of the Divine. He who has already found Ramanuja is guiding us to rush towards Him.