There are times when life brings incredible experiences your way. For me, yesterday was one of those.

Just two days before, I had received a phone call from the Principal of a small school. One of her mentors had suggested she invite me to speak at an event the school was hosting. So, although it was at such short notice, would I please consider making it to the occasion? Gamely, I agreed and we exchanged a few emails to work out the details.

Nothing had prepared me though for what I saw when I reached the school.

A portion of the road outside the school had been cordoned off. About a 100 men and women were seated there. Lots of kids were running around. Some people were standing by the sides and several others peeping out of the houses on either side of that road to know what the hullabaloo was all about. A sound system was set up towards the front of this assembly, with a lamp ready to be lighted and a board display of some charts setting the tone for the event – Father’s Day celebrations. 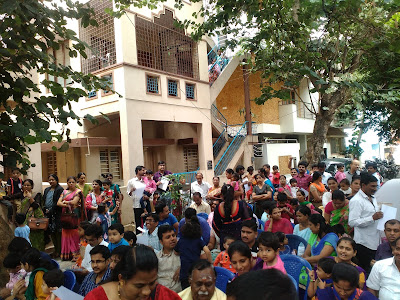 I felt my heart sink. In this type of a setting, how would I get these people to not just fill out a questionnaire but also pay attention as I handed out tips on being a ‘Fantastic Father’? Clearly, I would have to speak more in Kannada than in English. The Principal had already indicated that I came highly recommended by her mentor as someone who spoke extremely well in a way that touches people. That impression had been formed during a previous talk I gave in the solemn environs of a seminar hall with a snazzy PowerPoint presentation. I wasn’t sure if it would sustain in this festive atmosphere and an audience that seemed more jovial than introspective. 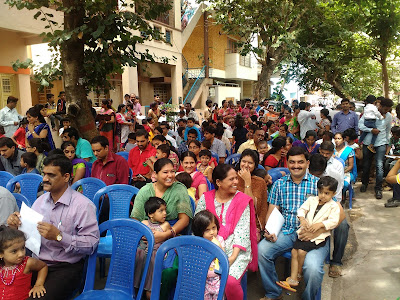 As we lighted the lamp to inaugurate the event and my mind focused on the invocation to Ganesha, I was hit by a humbling realization. Carried away by my astonishment when I reached the venue, I had lost sight of the truth I remind myself of before every event – that it is He who is speaking through me and saying that which is most essential for the listeners. Nothing is impossible for the Omnipotent One and all I had to do – like always – was surrender to His will.

The Principal then introduced me and we got things started by handing out the questionnaire (and pencils too, for those who needed them) and giving instructions about filling it out. I then went on to speak about how fathers need to be role models for their kids and gave out some parenting advice. 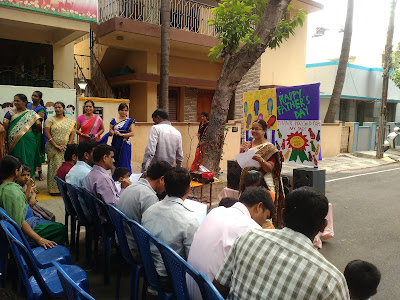 The event was going to continue with games for the dads and would take much longer to complete. I had taken permission from college to attend this event, so I said my goodbyes and left. The Principal and a few of the other teachers said my talk had covered all they wanted to convey to the parents. As I wound my way through the audience, a few parents came up to thank me for having opened their eyes to some particular aspect; others said that they would do their best to adopt a certain tip.

This event made a strong impression on me for several reasons besides my personal experience. A school that is still not big enough to have its own auditorium did not let its enthusiasm to be confined by practical considerations; instead, it went on to achieve its dreams by some out-of-the-box solutions for hosting the event.

The Principal had noticed that most of the fathers usually pass on the school responsibilities to their wives and strongly wanted this trend to change. So she had decided to celebrate Fathers Day to drive home the fact that they must be more involved in their childrens’ upbringing.

The audience was largely made up of what we call “aspirational India” – a class that is in the process of rising up the social and financial ladder. For me, the emotions they expressed seemed more genuine than those of social high fliers who make polite noises about your wonderful presentation.

Perhaps the biggest learning of the day was that when determination meets Divine will, nothing is impossible.
Posted by Anu at 08:31