Crisis can strike anyone, anytime, anywhere. You can never anticipate it and that’s the reason why your reaction to it is an instinctive one. Some people think that crisis can serve to build character and maybe it’s true, but that happens much, much later, after the crisis has passed, and only if one is inclined to learn by introspection and insight. At the moment when catastrophe strikes, you can only exhibit the character ingrained in you.

Seen someone panicking when things go wrong? That person is likely to be of an anxious temperament. The people who stay calm when disaster strikes? They’ve probably spent a lifetime cultivating that composure. And while it is true that moments of crisis can cause one to find unknown reserves of strength, it is extremely rare for ordinary people to be moved to superhuman efforts to save more than their own skin.

Imagine you were in a remote place out in the wilderness.

An ambulance comes to evacuate you to a medical center. Your ambulance meets with an accident - Crisis 2

One nursing assistant dies; another is badly injured and the Medical Officer, who was supposed to take of you, is caught in the wreckage and himself in need of medical aid - Crisis 3

What would you do?

We may have different responses to this, based on the kind of character we’ve cultivated throughout our life.

But for someone who’s been educated and trained in the Indian Army under the motto of “Service Before Self” and attached to a unit (Rashtriya Rifles) that is driven by the spirit of “Dridhta Aur Virta” (Determination and Courage), the answer to that question would be a no-brainer. Despite probably realizing that his course of action would leave no chance of a happy ending. 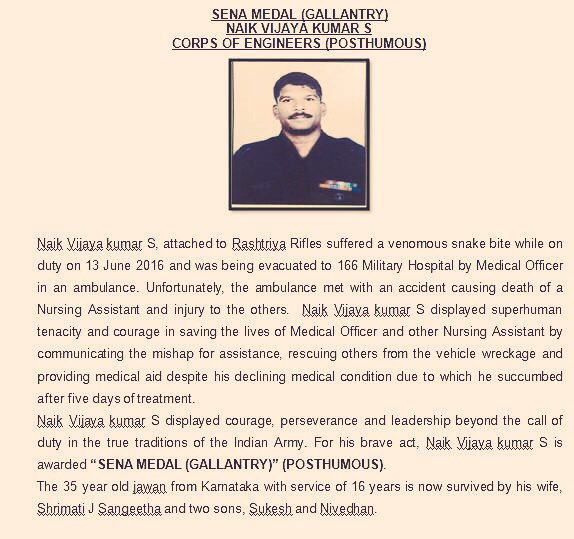 Take a look at the citation in this picture. Notice that “beyond the call of duty”? Let's imprint that on our minds. Every time we find a petty thought cropping up in our mind, telling us, “But that’s not my job,” let us remember that there are so many people helping make life easier for us without our even being aware of it. Let us allow this realization to guide our actions so that if and when some crisis strikes, we’re ready with the character required to face it.
Posted by Anu at 21:04