She sank into the seat with a sigh, leaning her head back and closing her eyes, seeking respite from the exhaustion of the past few days, as she waited for the bus to leave. After what seemed like ages it was finally Friday evening, and time to go home. Time to revel in her mother’s cooking and sisters’ excited patter and the complete “at-home” feeling that only someone who lives in a hostel during the week, can truly appreciate.


The rocking movement of the bus must have lulled her into a light doze, for she was startled awake a little later when someone standing in the aisle suddenly lurched into her. Looking up, she found it was an elderly woman who was finding it difficult to stay balanced as the bus driver blustered through the sharp turns of road.

The young girl was very tired and reluctant to spend the rest of her 30-minute journey standing. Yet, something within pushed her to stand up and offer her seat to the senior citizen. By the time she reached home, the girl was even more tired in body, but felt a tiny glow deep within, that perked up her spirits.

Later that night, she narrated this incident to her older sister, and in conclusion said, “I was feeling so tired myself and yet, I made a sacrifice for the sake of that old lady.” As she basked in the glory of her selfless action, the older sister told her something. A bit of advice that she found deflating at first, but, which, in hindsight, turned out to be one of the most valuable lamp posts, guiding her throughout life.

Even today, I remember my older sister telling me:

“If, doing something to help someone else gives you a sense of superiority because you’ve made a sacrifice, it is better you don’t make that sacrifice for it will lead you to become egoistic and that kind of an ego is the worst thing you can possibly have.”

In her own way, my sister had cautioned me against falling into the trap of what is one form of “saatvik ego” – the feeling of pride and superiority one gets from being good or doing good. After having used that advice since the past few years as a lifeline to try and stay humble, today I’m able to fully appreciate the wisdom of her words.

The realization has also dawned that whatever one does must flow naturally, as the very nature of one’s being, not as an effortful action done by keeping a probable future outcome as the goal to be achieved.

I was reminded of this message yet again today evening. I walked into the garden outside our home and found two Brahmakamalams in full bloom. Emerging on graceful stems from the succulent leaves of the plant in a small pot placed in the corner of the compound wall, the blooms stood resplendent and beguiling with their faint fragrance.


Unconcerned by whether someone saw them or not, they dangled silently. Unfazed by the hectic activity of people and vehicles moving on the adjoining road. Simply being what nature had intended them to be. And, by their very presence, giving bliss and peace to anyone who happened to look at them. 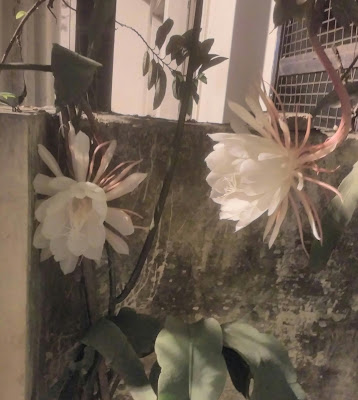