One Challenge Too Many

I step out of the kitchen and search my son’s face for the emotion that accompanies this announcement. He’s at that stage where he says things for the sole purpose of getting a rise out of me. But I know his tricks and it’s a battle of wits between us, so I’ve developed my own intelligence-gathering mechanisms. A glint in the eyes is a dead giveaway, as is the impish laugh tugging at the corners of the mouth, waiting to find relief in the guffaw that ensues when I take the bait.

So, I respond to his statement with a mere smiling, “Hmmn…why do you want to do it?”

Deprived of prey, and yet, still trying to turn the exchange into a joke on me, pat comes the reply, “I mean, not all of it…just the part about waking up at 4.20 am.”

Now, it’s my turn to score. “Why do you need the Blue Whale Challenge for that? You could always come up with your own thing – maybe call it the ‘Brahmi Muhurtam’ Challenge, even!”

“And do what after that?”

“Oh, I’ll help you with suggestions. Let’s say, tasks like –


He’s quiet, and I wonder why there’s none of the usual “No way” response. Perhaps, he’s learned too well from me not to take the bait? 😉

“And what will be the last task at the end?”

“Maybe you can go somewhere,” I say unthinkingly. Immediately, I pray, that in keeping with the spirit of the topic, he won’t come up with a quip like, “Yeah, somewhere like Vaikuntha.”

Quickly, I continue, “Maybe you can go to the Lord Ranganathar temple at Srirangam and post a selfie from outside near the gopuram?”

“Because 50 days from now, I’ll be having my exams…how can I go to Srirangam in the middle of that?”

He doesn’t know it, but inside, I’m smiling. I thought he would refuse doing it saying those tasks are too boring or difficult but the reason he comes up with says he may not be averse to doing at least a teeny-weeny part out of some of them. Not bad at all for someone at the volatile age of 15, I think. Or, knowing the guy, maybe he knows an answer like this that leads me to such a conclusion will make me happy, and he’s playing me. 😐

Whatever the answer to that, I’m hopeful of one thing – that the communication channel we have going between us will preclude the need for him to take recourse to such horrendous ‘challenges’.

But then, I remember something he told me just one day before this discussion. A couple of guys he knows have actually downloaded the game out of curiosity and been doing the initial few tasks. When it came to the self-harming ones, they decided to quit and delete the app. On doing that, one of them received a few calls from the ‘curator’ of the game, asking why he quit. The boy has reportedly told that chap that he will file a police complaint and then, the calls have stopped.

I ask my son if these guys who tried the game, are in some kind of bad situation or depressed. He says no, they were just experimenting, because they were curious to see what the hullaballoo is all about.

And this is where I’m annoyed at the way the press chose to sensationalize the whole issue, without paying heed to the guidelines they’re supposed to follow when reporting about suicides and mental health issues. Tanmoy Goswami explains the nitty gritty of it beautifully in this post on The Health Collective and I strongly recommend you read what he’s written here.

I’m pretty sure many of you have received and forwarded the message that circulated on WhatsApp as a warning against the Blue Whale Challenge. However, as we all know, it’s not enough to merely point out a problem; it’s equally, if not more, important to provide a possible solution or at least an alternative.

Which is why, now, I propose a challenge for you, the ones reading this blog post. An online counseling platform, YourDOST has come up with a Yellow Dolphin Challenge to help our youngsters take control of their lives. Are you up to the challenge of making the news of this positive alternative go viral, at least in your circle of family and friends and colleagues? Just click this link to share on social media.

Just as I was writing this post, I clicked on a friend’s ‘status’ on WhatsApp and found this image. It resonated with me because of the conversation with my son. 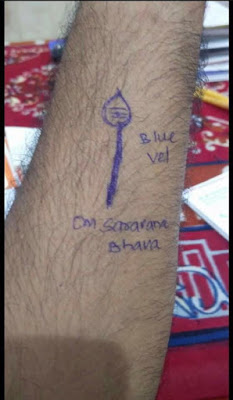 For those of you who don’t get Tamil, “Vel” refers to the spear associated with Lord Karthikeya, also known as “Saravana” because He is believed to have been born amongst the reeds.

Kudos to whoever came up with this idea of a “Blue Vel” challenge! Whether people take to it or not, it serves, at the very least, as a reminder, that when all else fails, He, the Supreme Lord, is always there to give us strength and succour!!