We reach the Chilkur Balaji temple within a mere 35 minutes. No sign of any of the ‘traffic’ the airport guy warned us about. The first impression as we near the temple is that of a small, ordinary village that has grown famous because of the temple. The road from the parking area to the temple is cluttered with the usual shops and stalls selling items ranging from pooja saamagri and temple memorabilia to trinkets and toys.

One chap latches on to us, insisting that we buy the tulsi mala, coconut etc from his shop. He never lets us out of his sight, and when we reach his stall, asks me to leave my chappals by the side of it for safekeeping. I do so. By the time I wash my feet at the tap close by and get back, there’s been some discussion and hubby has found that the adjoining stall has better items, and has switched business to the old lady there.

Angry with being thus ditched, I’m coldly told to take my chappals away from the place where I’ve left them. I quietly move them to a place behind the old lady’s stall, wash my feet again, and we walk towards the temple entry point.

There’s a spot for breaking coconuts. A wall has been constructed in such a way that when you break the coconut, one half falls on your side of the wall, for you to carry home, and the other half falls on the other side, for use by the temple.

My son tries unsuccessfully to break the coconut, so I step up to the task. My blow is not aimed right, and the entire coconut flies to the other side of the wall, and is irretrievable. It wasn’t meant for us – Balaji wanted us to offer the entire coconut to Him, is my conclusion.

After completing one circumambulation, we notice the point from where people are entering inside to get darshan of the Lord. We join the small queue and inch forward for a darshan that lasts a few seconds. Enough to catch a glimpse of the vigraha of Balaji with a special feature – four arms instead of the usual two.

As usual, there are no prayers forming in my mind. I’m aware of only the silent chanting happening within me, along with a sense of extreme gratitude for His grace.

We move away from the sanctum sanctorum to receive tirtha and tulsi. There is no hundi, but there is a plate where people have put their offerings. I place some money there, too….and the person standing there notices it, and thrusts a few copies of the newsletter the temple publishes, called VAK (Voice of Temples). 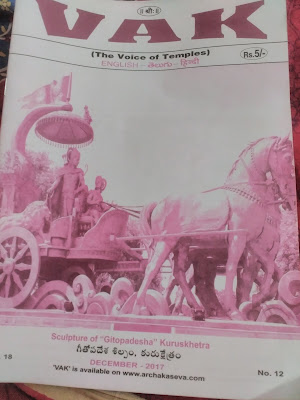 The newsletter has a nominal cost, and I get the exact number of copies to compensate the amount I’ve offered. But I don’t realize that immediately, and look at the person with a questioning look, indicating one newsletter will suffice. He tells me I must keep all of them, and distribute to people back home.

We walk on to do a few pradakshinas. Those who are doing the 108 pradakshinas have a small card in their hand with numbers to tick off as they complete each round.

The priest of the temple is sitting on a small porch-like structure outside the sanctum sanctorum; he can watch the people in the queue for darshan as well as those doing their pradakshinas. And – the most special feature of this temple for me – the priest has a mike in hand, and is engaging with the crowd of devotees in a most unique manner, helping them keep their minds on God as they go about their holy task.

First, he’s chanting the “Srinivasa Govinda, Shrivenkatesha Govinda” stotram. He says the first word, the devotees chorus, “Govinda”; he says the second word, we again chorus, “Govinda” and so it goes on and on for every line of the stotram.

Occasionally, the priest breaks the monotony with a few words of advice in Telugu, English, Hindi and even Tamil. He quips, “Even if you talk in English, but don’t forget that for us Indians, New Year is the day of Ugadi, not 1st January!”

A little later, he says, “People ask why there is no hundi in this temple…I tell them that in Chilkur, there is only Balaji….the hundi for settling your accounts is in Vaikuntham!”

He notices a girl in the queue without kumkum; observing that she’s a North Indian, he talks to her in Hindi, warning that Shani will catch those who don’t wear bindi, and gets one of the lady volunteers to place some kumkum on that girl’s forehead. The girl smiles benignly and bows to accept the kumkum, while I laugh inwardly, thinking about how some news anchors would have a field day berating such incidents by – ironically – calling “feminist” panelists wearing big bindis !!

In the middle of the Govinda chanting, suddenly he announces, “Bharat Mata ki….” And the crowd shouts back, “Jay”….and he tells us about how desha (nation) is not different from dharma (righteousness) and that service to one is service to the other.

Our priest is not done yet. Out of the blue, he begins to recite, “Johnny Johnny…” and the crowd chimes in with, “Yes Pappa”….when he says, “Open your mouth…” they automatically say, “Ha ha ha…” to which he has a quick comeback…..”This….this precisely is the duraadrushtam (misfortune/tragedy) of our people today…..we are ready to blindly recite something meaningless, but our mouths don’t open to say Govinda!”

Chanting, laughing, smiling and maybe pondering over his words, all people are happily doing their pradakshinas. It’s quite obvious that not all of them are here for visas; who knows what all troubles and need for succor have drawn them here? And yet, there is no sign of anxiety on their faces; just a calm sense of acceptance that comes from faith in Chilkur Balaji.

After sitting in the temple premises for a while and soaking in the atmosphere, we leave, and reach the airport well ahead of time, with no rush; after having lunch, it’s time to board the onward flight for Bhubaneshwar.