I catch a light nap on the flight out of Hyderabad and wake up just as the aircraft begins its descent to Bhubaneshwar. The first impression is one of so much greenery and so less concrete. We make our way towards the baggage area and the sights that greet us are a promise of a cultural extravaganza.


After the heavily crowded Bangalore airport, and the mildly busy Hyderabad airport, Bhubaneshwar airport is the equivalent of a quiet, sleepy town with very few travelers in view. The place where we’ve booked our stay has also made the travel arrangements for us. So, we collect our baggage and wait for the taxi to pick us up and take us directly to see the places in the city.

A few harried calls later, the car arrives. It’s about 4.45 pm but it looks like dusk is not too far away. The person driving the car, a puny chap – A – gets out, and approaching us, almost bends to the ground from the waist up in greeting while simultaneously saying “Namaste.”

We get into the car, and my nose is assailed by the unmistakable smell of ethyl alcohol. I glance questioningly at hubby and he gives a quick nod, confirming my suspicion. I don’t remember the exact conversation now, but somehow, within the next minute, A sheepishly admits, “Subah mein liyaa thaa, ab nahi” (I took the drink in the morning not now).

The windows are open and the smell soon drains out; but I’m wary. Surprisingly, it seems like A’s driving skills and alertness levels are unaffected and after a while, I relax and take in the sights and sounds of the place. Lot of banners of the Odisha CM Naveen Patnaik, outlining the work he’s done, dot the main roads. A is quite the fan, and gives us his adulatory opinion of his CM.

A few minutes later, we reach the famous Lingaraj temple. My sisters have told me to not miss visiting this 11th century built temple because of its specialty – the main deity is offered both Tulsi and Bilva leaves unlike other temples of Lord Shiva where only the bilva is offered.

A tells us to leave our bags and mobiles in the car as they’re not allowed inside. I’m a little skeptical because I notice other women carrying their handbags inside. Anyway, I finally decide to trust A and take only my money purse along.

One of the first things I notice as we near the temple entrance is the colourful dhotis worn by men who are apparently the famed (or its opposite) priests or “Pandas.” They look quite fashionable in their multicoloured, multidesigns handlooms, and I’m sorry to not have my phone to click a picture for the blog.

One of them approaches us and although we’ve decided not to get “trapped,” something about this person makes hubby agree to let him show us around. He takes us inside and explains a few things about how the temple is constructed, the typical features of the Kalinga style of architecture, that there are about 50 different shrines inside the temple complex dedicated to both the Shaiva and Vaishnava deities and so on…

He points to the flag fluttering from the temple top and explains that because this is the temple of “Harihara” – both Hari (Vishnu) and Hara (Shiva), there’s no trident or trishul at the top. Instead, there’s a bow that symbolizes the Vishnu component.


Our Panda takes us to the several shrines and explains in brief about each one. He points out the temple kitchen where prasadam called “bhog” is prepared several times a day. The special feature of this is that clay pots (5 or 9) are placed one on top of the other and positioned over a wood fire; at a given point of time, the rice in all the pots right from the topmost one to the last one is cooked to the same degree!!

The Panda tells us that a few scientists from Mumbai and Kolkata have visited the temple to carry out a study of this phenomenon and till date, no explanation has been found. How this happens no one knows….indeed it is the grace and wondrous capability of the Lord!

We move towards the main sanctum sanctorum that houses the linga’s circular base but curiously, the vertical part of the linga isn’t there. Our Panda tells us that instead, the centre of the linga has a “spatika saligramam” symbolizing Vishnu – that’s why this shrine is called Harihara.

He tells us about how donating towards annadaan in this kshetra is considered to be good, and we contribute a small amount, doing sankalpam in the name of my father-in-law.

An interesting side note….there’s a crowd in this place and in the rush, a 100-rupee note drops to the ground from either someone’s purse or from the offerings devotees have placed in the pooja plate. Even as I notice it and think of picking it up and handing it over, a hand suddenly darts towards the note, picks it up and then, I see where the note is going and I’m flabbergasted….it’s our Panda who has picked it up, is touching it to his eyes reverentially, saying, “Lingaraj ki jay” or something like that, and coolly, tucking the note into the waist band of his dhoti!!!

I’ll come back to this episode a little later in the travelogue…..

Our Panda hands over a box of dry Prasad called “Khaja” packed in a box made of leaves of a palm tree. 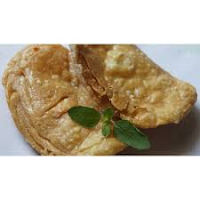 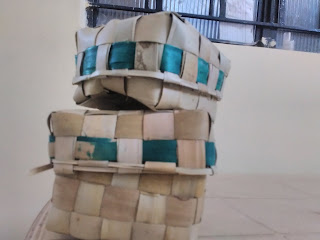 He has already told us in the beginning itself to give him a dakshina of whatever we deem fit; so we hand over an amount that he is visibly very happy with.

He bids goodbye to us, and we wander around a little, taking a look at all the other shrines and appreciating the beauty of the intricate carvings on the temple structures. Without access to a camera, we have to make do with carrying the imprints of the amazing architectural marvel that this temple is, within the mind’s eye.