Finally we make our way out of the temple. Because we’ve exited from the west gate, we miss seeing the famed Anand Bazar where Mahaprasad is sold. We retrieve my mobile phone, and a few minutes later, we’re back in our taxi, and hubby requests the driver S to take us to a “good” hotel. I chime in, specifying “only vegetarian” because from experience, I know the concept of “good hotel” is a very, very subjective one.

S drops us at one such place. We are relieved to find some “no-onion, no-garlic” options and tuck into our meal heartily.

As we set out for Konark, we pass by the Gundicha Ghar temple and stop for a visit. This temple is also called “Mausi ka Ghar” because Gundicha is the aunt of the three deities, who visit her during the famous Rath Yatra, and spend some time there.

On being asked to take a ticket paying Rs. 5/- some tourists drip sarcasm, “Mausi ka ghar dekhne ke liye ticket??” (A ticket is needed to see the aunt’s house?)

At one place, there’s a shrine of Devi Lakshmi at one end of a corridor and a vigraha of Lord Narayana at the other. The Panda in the Lakshmi shrine presses a gold-plated coin into my hand and before I can react, another Panda insists I walk ahead to the opposite end of the corridor, and pray to Narayana.

My senses are on high alert after the incident in the Narasimha shrine in the Jagannath temple complex, but I’m not so tough as to refuse accepting something divine that has been given to me. Hubby has walked on ahead, and only my son is by my side.

At the Narayana shrine, the Panda pushes a Vishnu paadam and Lakshmi murti into my hand. (see picture below) 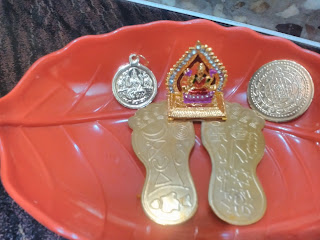 He asks me to open out the pallu of my saree, and drops a few rice grains into it, reciting some mantras and asking me to repeat. I’m told that I must take this rice back home, offer it to the Tulsi plant there, pour a little water over it, and anoint the forehead of my husband and son with the mud near the Tulsi plant. Finally, he recites a litany that includes blessing me, saying that just like Lakshmi and Narayana are always together, I will always be with my husband…..(oh no…is there not even the teeniest chance of an escape then? 😜😜)

By now, I know what’s coming, and am bracing for it. I understand what he’s asking when he says, “Teenon bhagwan kaa 100 rupaye dakshina dedo,” but place only Rs. 100/- into his outstretched palm.

At this, he first holds the knot on his sacred thread and says he is a brahman, and swears that he will not speak untruth. Next, he tells me that of all the people passing by, he only called me because he could divine I was needy and adds something about the gray strands in my hair giving him a clue. Now this is obviously a marketing spiel - no divining or gray hair clues are needed – it’s just that I look like an outsider and not a local, and that’s the reason he’s latched on to me.

I’m reluctant, but he doesn’t give up. Finally, I pay up the remaining Rs. 200/- and rush away from the place. My son is again fuming, and appalled at how horrible these priests are, cheating devotees in the name of God.

We quickly make our way out, ignoring all stretched out hands, and prayerful pleas, and blessings the priests at the other shrine seek to thrust at us. Thankfully, this is the last of the “worshipping” temples for us, and we drive on to Konark.

Is it the desperation of poverty that drives these Pandas to such methods? Aren’t they incurring paapam (sin) by behaving thus in the Lord’s very presence? (Remember the incident from the Lingaraj temple where our Panda pocketed money that didn’t belong to him?) Is it some curse they’re undergoing, that entails going against Dharma in the temples of the One who upholds It? Till when will the Lord forgive their trespasses?

So many questions….but no glimmer of an answer until we get back home and hubby recounts this incident to my brother in law, who tells him this story of Devi Seeta’s curse.

It seems Lord Rama came with his brothers and Seeta to Gaya (in Bihar) to offer pindam (offering of rice and sesame) to his departed father. When the brothers went to prepare for the rite, Seeta was playing with the sand on the banks of the river Phalgu. Dasharatha suddenly appeared, and asked her to give him the sand Pindams in her hand, saying he was terribly hungry and couldn’t wait till the son’s returned. She did as he asked, in the presence of 5 witnesses – the Phalgu river, a tulsi plant, a cow, the Akshaya Vatam (banyan tree) and a Brahmin.

When Rama returned and performed the rituals and Dasharatha did not come to collect the pindam, Seeta narrated what had happened, and asked the 5 witnesses to corroborate her story. Of them, only the Akshaya Vatam stood by her – the others, out of greed to receive a second offering from Rama, lied. In anger, Seeta cursed all the four – the Phalgu river would dry up at Gaya, no tulsi plants would grow there either, the cow would only be worshipped from its rear, and…..the Gaya Brahmins would be forever hungry, craving more and more, and make their living by begging.

I know – Gaya is different from Puri….but from the behavior of the Pandas I witnessed, looks like they’re the descendants of the chaps who got cursed at Gaya!

The beauty of the road driving to Konark takes our mind off the unpleasant episodes with the Puri Pandas. Once we get there, it’s like being thrust into an altogether different era where human skill and devotion have combined to scale the pinnacle of perfection. 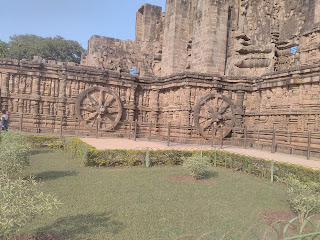 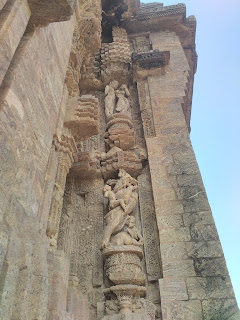 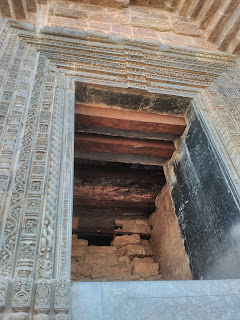