It’s the 31st of December. Our last day in Odisha. The last minute sightseeing is to the Udayagiri and Khandagiri caves which are close to where we’re staying. The two are on opposite sides of a road. When we arrive at the entrance, we notice there are steps to be climbed to the Khandagiri side, where there’s a temple looming in the distance. The Udayagiri side is more of a free walk zone, so we choose to go there first, paying the Rs.5/- per head entry fee.

Turns out to be the right decision, for the Udayagiri caves are about 2200 years old, and showcase the rock-cut shelters of Jain monks whereas the Khandagiri caves (where entry is free) is more of a cluster of human-built temples, with fewer natural caves. 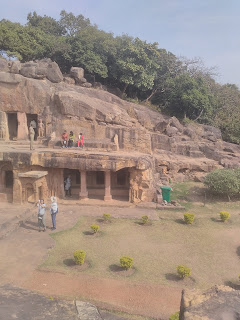 Most of the cells have very little head space and are austere; but some of them have intricate carvings on the outer walls. 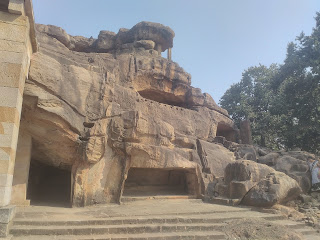 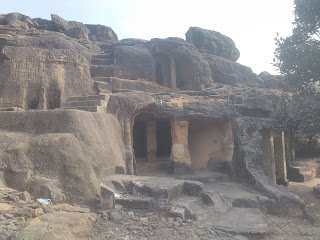 We traipse around the place for about an hour or so. Of course, as my brother-in-law had mentioned, the caves are not an architectural marvel and pale in comparison to the grandeur of the Ajanta Ellora caves. But they serve to give a glimpse into the lives of Jain ascetics in those ages.


Because we’re short of time, we skip going up the Khandagiri side and instead, move to the Tribal museum that comes highly recommended.
Photography isn’t allowed inside the museum; so I have no pictures to show you the painstaking level of detail and effort that has gone to depict tribal lifestyles. Different tribes, their clothing, ornaments, musical instruments, weapons and art forms have been displayed in different rooms spaced around a central courtyard. In each of the rooms, there’s a touch-screen information system that gives an audiovisual experience of all that’s displayed in the room. The courtyard itself has replicas of the different deities worshipped by the different tribes.

Outside, there’s an area where replicas of the huts of these tribes have been created, complete with appliances, shrines etc to give a feel of how the tribals live.

We look around the souvenir shop and by now, hubby and son are ready to leave, but I’ve noticed there’s a board saying “Herbal Garden” and my professional instincts perk up…I want to take a look at what herbs they’re growing, so I walk to the garden alone. There sure are a lot of herbs, but unfortunately, there are no name boards or labels.

Somehow, despite all the planning, it’s still a rush at the end. To know the value of 5 minutes, you must sit in a restaurant that has quick service, drumming your fingers and gawking at every server who exits the kitchen door, to see if you can spot the thali you ordered because you thought that would arrive fastest.

After a quick drive through the light traffic on Bhubaneshwar’s streets, and handing over a small parting gift to A, who again almost sweeps the ground bowing goodbye to us, we walk into the airport to see that it’s been transformed. The sleepy place we saw when we arrived now resembles a bustling hub with hundreds of travellers. But there’s one thing that still reveals the small town-feel: many groups of people have thronged to see off their loved ones – a sight that is not so common now in bigger cities.

Even as I’m beginning to relax at the smooth departure, hubby provides the mandatory last minute panic – he’s forgotten to pick up his wallet and mobile from the tray at the security check…!!

An uneventful flight to Chennai, and we land by 4.20 pm and because there’s a stopover of 5 hours, the plan is to visit Marina beach and Parthasarathy temple to round off the trip. This turns out to be the most adrenaline-filled part of the trip –

A small holdup in the airport, a dash to the Tirusulam station….

Rushing to “Beach” station by electric train only to find that to go to the actual beach, you need to get off at Central station ...2 or 3 stops before...

An auto driver who drops us off outside the Anna Memorial that’s away from the beach and running around saying “where’s the water?” like nomads in the desert ...

Rushing into what we later realize is a no entry area and a small run-in with Chennai police after doing this…then bluffing our way out thanks to the skills of hubby’s years in marketing ... 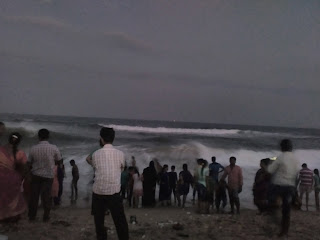 Saying a mental “sorry” to Lord Parthasarathy for not dropping in….

Crossing platforms not by the over-bridge but over the tracks…..

Finally, we’re at the airport, as usual, just in time. Just 45 minutes after taking off, we’re already landing at Bengaluru.

The drive home takes longer to complete than the flight from Chennai because of a long-drawn quarrel by the staff at the toll plaza and the fact that parts of the flyover have been blocked, apparently to prevent drunken youth from speeding on them in the “New Year” frenzy….

Sleep doesn’t come easy on half-filled stomachs; so I rustle up something at 11.45 pm and finally, even as youngsters go screaming around on their bikes, we fall into deep sleep, filled with a quiet joy, closing the pages on the Kalinga diaries.

A well-wisher had expressed her blessings a few days before, saying, “Next time, you plan a trip to Singapore.” I appreciate the sentiment and maybe God-willing I will go there, too. Left to myself, though, I’d rather spend the remaining travels discovering and experiencing all that this divine land we call Bharat Mata, has to offer.

Thanks to the merits from previous births, I’ve been born here in this janma….who knows where the next birth will be? While I’m here, let me try and gain as much saatvikata as possible from this punya bhumi….. 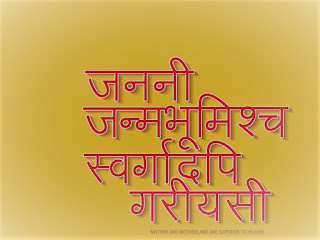