We walk to the entrance of the Konark Sun temple, only to realize that we haven’t got the tickets; so hubby goes back to get them.

The temple is built to resemble a chariot with horses and wheels all carved out of stone in stunning detail. Not to bore you with the details, but the wheels are actually designed to act like a sundial and tell the time.
The temple is oriented in such a way that the sun’s rays would enter from the main entrance at sun rise.

The mandapa that now remains is about half of what was the original height of the temple shikara. 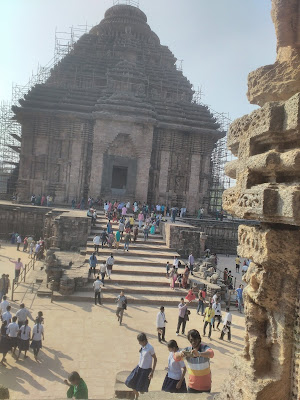 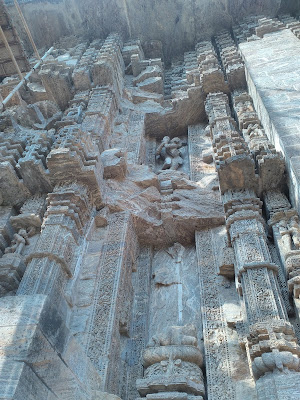 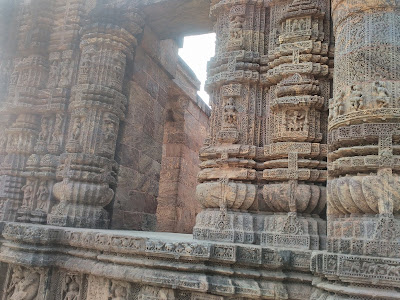 There are a lot of tourists, but because the area is so vast, it doesn’t feel crowded. This 13th century temple, declared as a UNESCO world heritage site, is now in ruins and yet, the architectural marvel stands out.

One can only imagine how majestic the temple must have been when it had been intact – amazing indeed must have been the skill of those who visualized, designed and executed the building of such a structure.

We wander around the place, admiring the beauty of the sculptures.

After a while, we leave, and I spend a few minutes looking through the several shops outside the entrance, picking a few memorabilia for close family. I also buy a few items for our Navaratri golu display – they will serve as a reminder of our visit to this place.
Next, we drive to the Chandrabhaga beach that’s quite close by. My son and husband have a gala time bathing in the water; I mostly watch over our things, only just stepping into the water for a while, hanging on to the car keys, for our driver S too decides to take a dip. The beach is not very crowded; a few fishing boats glide past in the distance. It’s a bitter-sweet moment – I realize just how much I miss the sea (which, being just 20 minutes away from my college in Goa, was one of my most frequented getaways – both alone, and with friends). And yet, the rhythmic rise and fall of the waves and just being close to the water feels like a homecoming of sorts, and makes me feel at peace.

Much sooner than we would have liked, the sun sets and it grows dark, so it’s time to pull a reluctant teenager out of the water, and get back to Bhubaneshwar. 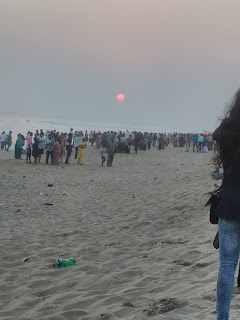 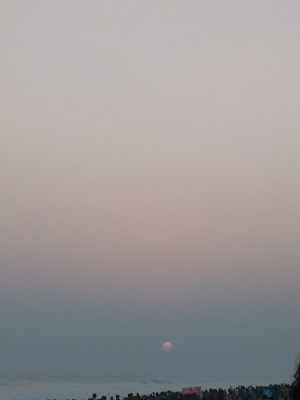 The sun sets like an orange ball that’s been swallowed by the sea.

On our way back, S takes us to a restaurant named Venus that serves South Indian vegetarian fare too. They have a non-veg unit too but it’s on the top floor, with a separate kitchen, so we’re relieved there won’t be any mix-ups.

The waiter who comes to serve us looks like a Tamilian, with a vibhuti on his forehead to boot. Yet, the minute he begins reciting the list of dishes available and says “Bada” for ‘vada’ in that typical Odia/Bengali style of converting “V” to “B,” we know his looks are deceiving.

My son has what he wants; we stick to plain dosa and “Bada” with only chutney for it’s still the day of “Baikuntha” Ekaadashi.

Back home, Vaikuntha Ekaadashi is a huge event, with people from all walks of life rushing for darshan at some or the other temple right from the wee hours of the morning till late at night. Here in Odisha, it’s no big deal – except for one Panda inside the Gundicha Ghar, sitting by an idol of Vishnu, with a board proclaiming “Ekadashi Narayan” or something like that, there’s no sign that people know about this occasion. Obviously, for the people of Odisha, D-day is the Jagannath Rath Yatra.

Once again, I realize how conditioned we are by the part of the country in which we live. Yet again, I’m reminded about how the milieu in which we exist, makes a big difference to how we experience an occasion. Even the type of emotion a temple or a deity evokes in us is subject to this conditioning.