We get back to our car and although it’s just 5.40 pm, the sun has already set. Darkness is gathering and the temperature too begins to dip. A drives us to our next destination - the Shanti Stupa of Dhauligiri where we are to watch the famous sound and light show that starts at 6.30 pm.

We have a few minutes before the show, so we nip in to a nearby restaurant for some hot tea to warm us up. We’re the only customers and yet, the tea takes more than 10 minutes to materialize, just as we’re about to say we’ll come back later to have it. We’re realizing that things move at a slower pace in Odisha than in the Silicon Valley of India. Or who knows, maybe they move at the pace they must, and it’s we who are at fault, conditioned to having things move with the speed of a silicon chip.

We move to the venue of the show and take our seats under the starlit dark sky, opposite the huge dome-shaped Shanti Stupa, built under the direction of King Ashoka, at the spot that marks the end of the gory Kalinga War. I manage to take one picture of the structure in the dim background light before the show starts, and we’re instructed to put our phones away because filming/photography is prohibited. 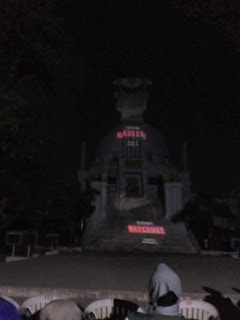 The show begins with a voiceover in Hindi as images in vibrant colour are splashed on the background of the Shanti Stupa, lending life to all the voice narrates.

Starting from the era of Chandragupta Maurya and Kautilya, the 30-minute show takes us through the entire saga of how Ashoka despite being the younger son was far more capable; the pride his exploits inspired in his father and the jealousy that took seed in his older brother; the many successful conquests led by Ashoka; the indefatigable spirit of the people of Kalinga Desha who held out the longest; the final onslaught to win the kingdom; Ashoka’s monumental despair at seeing the destruction and bloodshed that led him to question the purpose of it all….his turning to the Buddha in search of peace, the message Ashoka’s life gave to the world, and how he facilitated the spread of Buddhism to places far away from Bharat.

It has been an enchanting experience and the only peculiar note I’ve observed is the usage of some Urdu words in the middle of the chaste Hindi that makes up the commentary.

A drives us to our accommodation which is a good 45 minutes away and after a dinner jointly prepared by A and another assistant there, we settle in for the night. The next day is Vaikuntha Ekaadashi, a very important day for us and we’ve planned to spend most of it in the Jagannath temple at Puri.

Thankfully, arrangements have been made with a travel taxi guy and he’s been instructed to pick us up at 5 am.

We all wake up around 4.30 am. The plan is to head directly to Puri – which will take an hour or so – and bathe in either the Shwetha Ganga which is one of the sacred bathing tanks near the temple or in the sea itself for a “samudra snaan” before darshan is considered meritorious.

We hear the sound of bells chiming and an aarati being sung – probably from a nearby temple.

It’s already 5.15 am, and no sign of the taxi yet. We start getting restless, and make a few calls. Finally, the vehicle arrives around 5.40 am and we step out into the freezing cold. I wonder for a moment about how we will bathe in the cold water in this weather; then, the thought passes, replaced by the confidence that God will take care of things….was the delay in our starting time after all, a part of His plan?

Our driver S has the heater going full blast and after a while, the warmth seeps into us, but we’re not about to be lulled into sleep…for the sun has risen in all its glory and the orange-yellow globe is seemingly traveling along with us. 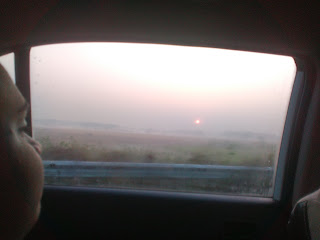 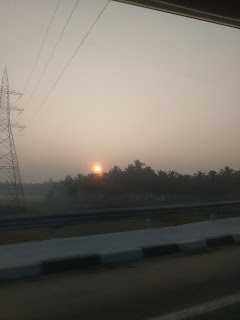 As we ooh and aah over the sunrise from our car, S tells us that all tourists go first to Konark to see the famed sunrise on the beach and then proceed to Puri. He remarks that we’re reversing the order by going to Puri first. Had it been some other normal day, maybe we’d have done what all do. But today, for us, the early hours of Vaikuntha Ekaadashi are a time for prayer and piety, and that takes precedence over watching the sunrise at the beach.

Even as he’s driving, at one point outside a roadside temple, S slows down, removes the cap covering his head, and bows down for a second with closed eyes before proceeding ahead. Hubby asks him what that place is, and S replies that it’s the temple of his Graamdevata (village deity) and somehow, it makes me happy to see that gesture of devotion from S. 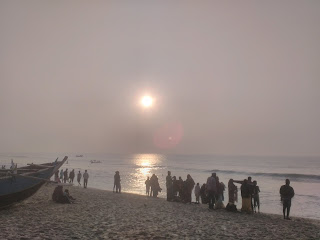 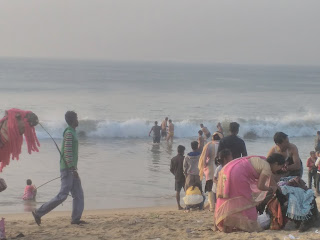 We quickly finish bathing and after a change of clothes, set out for the Jagannath temple. S drops us at the parking area beyond which private vehicles are not allowed, and we take a mini bus plying from there to the temple. 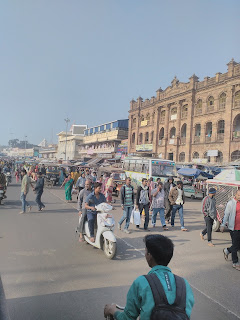 We get off the bus and walk through crowded streets to reach the entrance. After depositing my mobile in a locker, we finally make our way into the temple complex.

It’s said that donating particular things in particular holy places or kshetras has certain significance. I know from my sister that the Jagannath temple is the place where donating to feed people (annadaan) is considered the highest form of offering. So, we locate the official counter for annadaan, and we make an offering there.

Making our way around, we offer prayers at many of the shrines in the complex before heading to the main Jagannath Mandir for darshan.

The entire experience is a unique one and this post is already too long…so….I’ll continue tomorrow….
Posted by Anu at 23:26