The driver has been asked to come by 7.30 am; but he turns up only an hour later. Then, another 40 minutes for breakfast at another Venus outlet, so it’s around 9.30 when we finally set out. On our driver S’s recommendation, we’ve experimented with one of the state’s unique sweets – no, not the rasgulla (over which Odisha fought with West Bengal for the GI tag and lost). This is another dish – it’s called Chenna Poda and is made out of fresh paneer and caramelized sugar.
Sampling this, the taste and texture reminds me of a sweet I’ve eaten long, long ago in my mother’s native village. In our language – that’s a peculiar mix of Kannada, Tamil and sounds a wee bit like Tulu – the dish is called “Eenacchi”– and its prepared by using jaggery along with colostrum milk (the milk obtained from a cow that’s just given birth).

Getting back to our journey, today we’re headed to a few places located farther from Bhubaneshwar, and closer to Brahmapur (which was previously called Berhampur, because that’s how the Odia people pronounced it!).

I’m the unofficial tour organizer; so I’ve searched for information and found that there are 4 places of interest to us –

One, the Maa Taratarini temple which is a Shaktipeeth, located high on a hill, and accessible by a ropeway.

Two – a natural hot spring called Taptapaani, the waters of which are reputed to be having medicinal value

Four – Chilka lake, which is famous as Asia’s largest salt-water lagoon, and it hosts a hundred odd species of migratory birds that arrive from Russia, Mongolia and the Himalayas.

First, we head for the Maa Taratarini temple. One interesting thing I notice – there is a toll to be paid at one point. The one-way fare is Rs. 70/- and two-way fare is Rs. 120/- but S mentions he’s a local, and so, we get charged only Rs. 40/- one way. S explains this is an internal arrangement; hubby says it’s possible because the payment is not yet automated/digitalized. I have mixed feelings – is it cheating the government, or is it a supportive measure designed to help taxi operators like S save on their meager incomes?
After driving for what seems like ages, we finally reach the point from where the ropeway goes up. There are steps to climb up the Kumari hill on which the temple is located. There’s a motorable road and one can drive up too, but we want to experience the ropeway – we’ve only done this once before at Haridwar, while going up to the Mansa Devi temple.

It’s an exhilarating ride, with a lovely 360-degree view of the fields, the houses, the forest, and a river.
We reach up the hill, and get tickets to go into the temple that has an architectural beauty of its own. 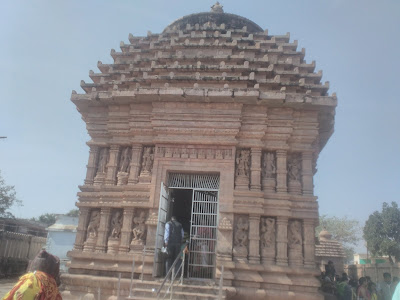 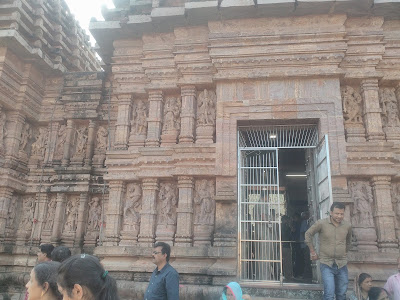 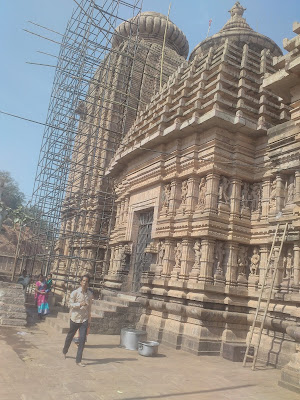 Inside the shrine, there are two statues of stone, covered with ornaments and in between them, there are two heads made of brass that are placed – these are called the living image of the goddesses Tara and Tarini.

The temple is not so crowded although a steady stream of devotees is passing through. I can sense some kind of an undercurrent of energy, although it doesn’t hit very hard. S warns us not to give any money to the Pandas there; instead, he offers some into the pooja plate. It’s time for the afternoon worship and the temple will close, so we’re ushered out through a side gate.

As usual at most such powerful Devi temples, there’s a space where people have tied ribbons of red and yellow cloth, to signify some desire expressed to the deity, asking for their wish(es) to be fulfilled.

If only there had to be some hooded vigilante like Vikram in the Tamil movie Kandhasamy to understand and execute those wishes, maybe our people would have been a happier lot! Or maybe it’s just that Naveen Patnaik has to win the next two or three elections to set systems in better shape? But knowing human nature, there’s always going to be something or the other that causes dissatisfaction; Devi Maas have Their work cut out for millennia to come!

By now it’s already 12.30 pm and S warns us it will take another two hours to get to Chilka lake; once we reach there, we’re to travel by boat to an island that’s home to a Kali temple, and also host to the migratory birds. The boat trip to and fro, and the time on the island will take close to another two hours. The boat trips stop around 3 pm or so; so we must hurry there. Which means the other two places – the beach, and the hot spring, must be struck off our list. And which leaves our teenager a little grumpy because the beach got left out. For a while, we try to work out other options but nothing else is feasible, so on to Chilka it is.

Now we realize that places that seemed close by when researched on Google, are actually hundreds of kilometers apart. It’s like if someone from Odisha had to come to see Karnataka, they couldn’t visit all of Bengaluru, Mysore, Hampi, Badami, Jog falls, Udupi, Belur & Halebid, Nagarahole and Coorg within 3 days, could they?
Posted by Anu at 20:15