There is an ad for Everest Masala where a woman, sitting in office, visualizes her daughter asking about what’s for dinner, then reaches home to find hubby and son also asking the same question. In my eyes, this woman is actually some kind of a saint because her frustration only appears to be with ‘what’ to make different every day. Not for her the gritting of teeth that ensues when women living in many normal, real-life families get asked this question and wonder ‘why’ they have to be the ones always cooking up interesting meals after a tiring day of work either at home or outside the home, while everyone else just sits around, waiting for the food to materialize on their plates.

That woman in the ad is lucky, because her quandary is easily solved by using the brand of masala being advertised. As if the other ingredients appeared out of thin air and the vegetables cut themselves and the vessels cleaned themselves.

Of course I’m not even considering touching on the topic of gender roles that ad portrays because except on days when I'm very, very tired, I'm generally okay with the fact that I do the cooking single-handedly in my home.  There are other women with strong ideas on this issue, who'd probably call me a traitor to the cause of feminism, who’ve written about it and you can read it here.

But watching that ad did remind me of how our mothers cooked up tasty meals without the help of the ready-made masalas. They did all the hard work at home – roasting the spices, grinding them and using a variety of ingredients to cook elaborate meals and delectable snacks to fill the stomachs of their multiple kids.

My mother also belonged to this category and to her six daughters, all she made tasted heavenly. I have especially fond memories of the Gokulashthami bhakshanam she would prepare – about 4 or five varieties each of sweets and savories. The preparations started two days before the festival and they would all be ready in record time, with very little if any, contribution from us daughters who were busy studying.

Then, on the afternoon of Gokulashthami, the festivities would begin with us setting up the mandapam and tying all these items inside it, for Krishna to consume. After the puja was over late in the night, Amma would hand out a sample of each of these dishes she had prepared, leaving us with little room for dinner, but no one had any problems with that.

When I got married, I made sure I had all my mother’s recipes neatly written in a diary. I used to refer often to it when I first started cooking. Over time, as my cooking skills improved, the frequency of peeping into it reduced. But till today, when I need to make any of the special sweets and savories for the festivals, out comes the diary with its recipes and elaborate instructions as dictated by Amma. 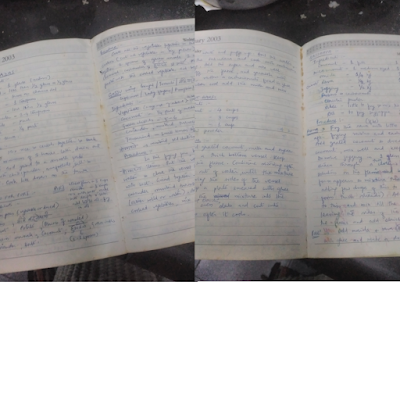 To this day, this diary counts among one of my most precious of possessions. Not because I need it to rustle up meals every day, but because looking through its pages, reading the recipes, reminds me of how a particular dish made by Amma tasted.

More importantly, on the rare occasions when I’m irked that having to cook takes time away from some other activity I’d rather be doing (like writing or reading), it reminds me to cook with patience and love for the people who are going to be consuming it.

It reminds me that food for the body is as important as food for the soul. For, as Swami Vivekananda famously pointed out, what use is Vedanta to the one with an empty stomach?