A group of about 10 to 12 girls were sitting in a circle and talking their hearts out. One girl refused to participate and just sat sullen, watching and listening. When everyone had finished, she finally opened up. Before coming to this meeting, she had made up her mind to commit suicide; but listening to the other participants narrate their problems, she had realized that her difficulties were nothing in comparison. She said she would take them as a challenge and prove her mettle by making a mark for herself in the world.

This was one of the most moving vignettes shared during the DISHA coordinator’s enrichment program I attended today.

Caught in a hectic lifestyle, stressed by the need to fit in with their peers, having to compete for recognition, with no one to listen without judging or advising, our youngsters may be social media savvy but emotionally, they are often lost.

During the DISHA workshops for college students, we have a group counseling session where one counselor sits with a small group of students, encouraging them to think and talk about their strengths, weaknesses and challenges. We ask them to share how they have felt when their actions brought someone joy or pain. 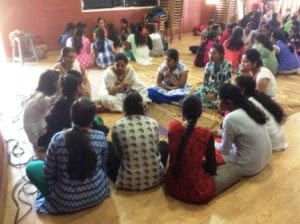 It is amazing how, voluntarily, these young people open up and share their innermost thoughts and feelings, sometimes even weeping, grateful for the opportunity to give voice to burdens they’ve been bearing silently. They say the process is cathartic – they feel relieved and cleansed and ready to face the world yet again.

As the DISHA coordinators shared many such of their experiences during today’s program, the common thread running through it all was the hard-hitting realization of how a small act of reaching out from our side has the potential to touch some youngster’s life in such a deep way.

Another aspect that almost all the coordinators spoke about was how these opportunities to interact with the youth act as a personal learning process, opening their eyes to the immense promise the youngsters show.

All in all, it turns out that DISHA is fulfilling its role of enriching and providing direction to many, many lives.