11. The smell of coffee powder. For precisely the reason that it was something not commonly encountered in Goa. Being a South Indian kaapi-consuming family in cha-favoring Goa was not easy because filter coffee powder was not easily available except through the Coffee Board outlet at Panaji, which was too far away from home for regular visits.

Our solution – Anna brought coffee beans from his two annual visits home to Hassan for his parents’ death ceremonies. We had a quaint coffee-bean grinding machine at home and anytime the beans were being powdered, the whole house was filled with that wonderful aroma of coffee. Later, once my sisters started studying at Goa Medical College, they would bring home the coffee powder when they came home over the weekend. 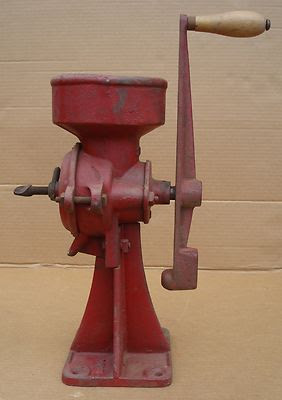 12. Learning many different things. Besides things like cycling that kids generally learn at age 11 or 12, I remember picking up some other skills that called for some hard work. We lived for a while in a house that had no piped water supply, so I also learned how to draw water from the well and walk while balancing the kudam on one hip.

I was so taken up with my neighbors’ practice of layering a portion of the ground outside the house with cow-dung that I wanted to do it too. Two or three times I went along with them on a dung-collecting mission into the pastures where the cows and buffaloes grazed. Using the dung collected, I made a coarse paste of it with some water in a bucket, then poured it over the area in front of the main door and a side door, and using a broom made out of stems of dried coconut leaves, created neat dung-coated spaces. I can’t seem to remember my mother freaking out for me doing this, though. Maybe she recognized that I’d grow out of it as indeed, after a while, I did.

13. Studying in the green, cool environs of St. Mary’s Convent from Class 5. The school building was huge, and so were the grounds surrounding it. Lot of trees all around the school made for a “green” experience and I remember walking around with a close friend, discussing many things, of which a major chunk was our common love of Hindi film songs with meaningful lyrics.

I was quite the nerd and that meant few advantages – my answers got written on the board for all others to copy, teachers were more kindly inclined towards me and this granted (what was then considered) the biggest privilege – being sent to the staffroom to bring some item the teacher had left there.

I especially remember the festive mood around Christmas-time with the crib-making and carol-singing competitions. In class 9 or 10 (not sure which), we sang a Hindi carol that I still remember word for word:
“Bethlehem ki thandi hawaaein, dheerey sey aao, dheerey sey aao
Soney do Ishwar ke bêtey ko, taaron ki jyoti, dheerey sey aao”
My school experiences could make up an entire blog post or two, so I won’t go more into that now.

14. The smell of fish. When we lived opposite the Government hospital at Tisca, there was an open space right in front of our house that was used to dry fish and what a stink it raised for the first few days. Being unable to bear that smell, we would close all the windows and doors and light some incense sticks, but nothing worked. Over time, we just got used to that annual event, though.

When in college, I dreaded drinking water in the canteen because even the steel glasses would smell of fish. But then, I was too level-headed to let that dislike overwhelm the need for hydration and so, I took it into my stride.

Now it seems crazy to me but for a while, I had this notion that I must grow immune to unpleasant experiences. So, during my days in Goa College of Pharmacy, I sometimes made it a point to take a route to the bus stop that entailed passing through the fish market, steeling myself to bear discomfort. Had I known then that life had many more discomfiting tests already in store, I may have not resorted to this self-torture. But then, maybe dealing with such self-inflicted unpleasantness was meant to teach me to cope with whatever was yet to come, so, it wasn’t a wasted effort, after all.

15. I’ve kept my favorite memory for the last – the SEA.  Although we did go to the beach a few times when I was younger, it was while studying in college that I actually developed a sense of kinship with the Arabian Sea. The end of tests and exams in college often saw a group of us friends heading to the beach to celebrate with the waves, the cool breeze and maybe an occasional bhel puri treat.

While doing my post-graduation, my parents had already moved back to Karnataka and that meant weekends too were spent all alone at the hostel. One of my favorite ways of spending time then was with myself, on the beach, oblivious to the stares of other people who had company. As I walked from one end of shore to the other, with the waves gently lapping my feet, watching the sunset, I found solace in the mind going blank, with nothing but the awareness of the beauty of that specific moment. Sometimes, I contemplated on things that must have then appeared profound to me but which I cannot now, for the life of me, remember.

But one thing I definitely remember is being strangely moved by the sight of the ships, far away in the distance, seemingly stationary to the onlooker, but obviously in motion through the water. Even as I stared at those blips in the water, I couldn’t help but wonder if the people on those ships too looked out over the blue expanse around them, thinking of the ones they had left behind. 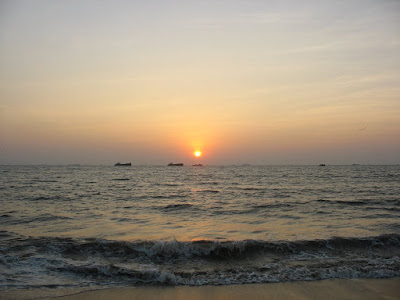 So far, I have quoted from my memory of specific experiences of life in Goa. Tomorrow, I will write one last piece on how these experiences enriched me and prepared me for life ahead.