He sat in the portico in the mild morning sunlight to ward off the chill that seemed to settle over him quicker these days.
As the stiff joints relaxed in the welcome warmth of the sun, his thoughts drifted away to the past as they often did nowadays.

Several images appeared in front of his mind’s eye.

An affectionate mild-mannered lady who left this world early – his mother.

Young boys who trudged long distances barefoot to school in their knotted-where-torn dhotis – his brothers.

Young girls who took on early the mantle of mothering the motherless lads – his sisters.

The young woman who followed him into an unknown land to raise their family, bearing more than her share of difficulties – his wife.

Then, he thought of his kids, feeling a little sad that unlike some of his peers, he had not been able to give them any great material comfort or inheritance.

Towards late evening, he sat silently watching as they all gathered around him for the customary bhajan session.

The only person missing was his first-born who was, right then, at a temple far away, praying for his good health - Dynamic M with an ability to attract people and soothe them with some timely help.

Next, he looked at - Hardworking Vi who always insisted on doing what was right even if it was difficult or caused discomfort.

His gaze lingered fondly on - Enthusiastic Va whose infectious positivity made people comfortable.

Then, he contemplated silently on - Even-minded A who stayed calm always to support others.

His face had a wide grin as he looked at - Smart K who had a rare farsightedness and a keen judgment.

As several voices sang in unison on H. S. Rama Iyengar’s 86th birthday, each of his daughters felt an immense sense of gratitude to their father for the qualities they had imbibed from him, along with his sense of deep devotion. Could there have been any inheritance bigger than this? 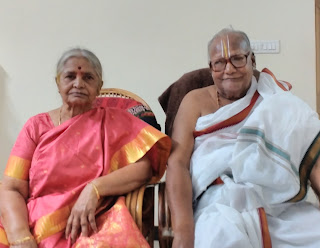 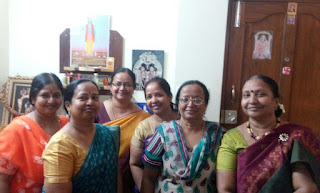