As I walked across the examination hall, supervising the students, my mind strayed to think of what to write today. Repeatedly, there was this thought of writing about music and its role in culture. I kept resisting it because, for a non-musical person like me, writing on this requires a lot of thought, research and time, if I must do justice to it.

Still pondering, I reached home to hear of the news that Dr. M. Balamuralikrishna – the doyen of Carnatic music – has passed away at the age of 86 years after a brief illness. Hearing this, I decided I must write something at least of my memory of this great personality. 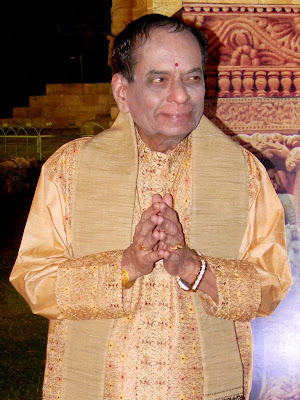 Living in Goa, I was far away from knowing much about Carnatic music although I did attend classes for a few months – not long enough to learn beyond the very first basic steps. I was always getting confused between the names of two South Indian singers – Balamuralikrishna and Balasubramanyam – because the first parts of their names were same. But once the “Mile Sur Meraa Tumhaaraa” video began playing on Doordarshan in 1988, I found a way to distinguish between the two – M and M – BalaMURALIkrishna – the one with the “M” in his name was the one in the “MILE Sur..” video.

To most Indians, Dr. Balamuralikrishna was the guy who appeared in this film immediately after the Punjabi set (consisting of the cast of the serial Tamas, I guess, with Om Puri and Deepa Sahi). He was the roly-poly man, walking on the beach, singing in Tamil about “isai” or music, with shots of Kamal Hassan and Ramanathan Krishnan (I think) interspersed.

To me, he was more familiar through his rendering of the Purandaradasa Krithis in Kannada, which were played regularly in my home.

I distinctly remember one particular song, “Naa maadida karmaa, balavantavaadarey, nee maaduvadeno devaa…” This translates to mean something like, “When the karmaa (deeds) I have done are overwhelming, what can You do to redeem me, O Lord?”

This song stuck in my mind because at that young age, the word karmaa sounded derogatory to me – like something to crib about. So, somehow, I concluded this song was sung in a sense of self-pity. Only later, when I grew up enough to understand the philosophy behind the concept of karma, did I realize the wisdom conveyed through the song with such simplicity.

Another song I remember in the unique nasal-ish voice of Dr. Balamuralikrishna is “Anugaalavu chinte, jeevake tanna manavu, Sriranga nolu mechuvaatanakaa” that means, “All the time, humans worry about something or the other; only focusing on Lord Ranga can give relief.”

Much later, after relocating to Bangalore, I got to know more about this great personality and his creativity. Not only was he a master of existing raagaas, he also contributed to Carnatic music by creating several new raagaas. He is also known for scoring the music track of the film Adi Sankara, the first film made in Sanskrit.

Despite achieving great success in the form of several awards, including the Padma awards, he remained a simple person. I read somewhere once that he remarked that his name was only Muralikrishna and the ‘Bala’ was prefixed when he gave his initial performances as a young child; yet, he used that prefix to keep reminding himself that he was still a child, a student, in the study of music.

In losing a stalwart like Dr. Balamuralikrishna, the country has lost a son who made an invaluable contribution to preserving and growing the musical culture of this land. In keeping with the tradition of Sanatana Dharma, let us pray that his soul attains the highest abode that he earned through his earthly sojourn.